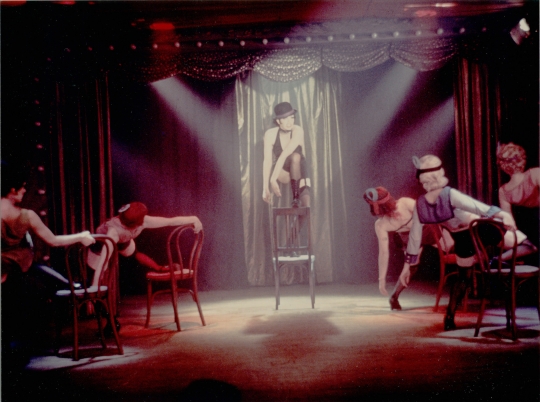 In early 1930s Berlin, aspiring writer Brian Roberts falls in love with honky-tonk singer Sally Bowles. The ex-pat American with her zest for life takes the uptight British academic on a merry tour of the nightlife of a capital city already abounding with the aggressive presence of the Nazis. The relationship is tested when they meet rich aristocrat Max and Sally begins an affair with him. But she’s not the only one ...This film version of the Broadway musical won eight Oscars. Based on Christopher Isherwood’s ”Berlin Stories”, Cabaret's portrayal of a disreputable, promiscuous anddecadent milieu was to set the international style for depictions of pre-war Berlin. Associate producer Harold Nebenzal, who was born in 1922 in Berlin and emigrated in1933 with his father, producer Seymour Nebenzal, has a voice-over 'cameo' as a radio announcer. Nebenzal was later to evoke the milieu and historical background of the film in his brilliantly written thriller ”Cafe Berlin” (1992), the story of a Jewish nightclub owner who survives the Nazis. The film will be introduced by Harold Nebenzal.

Born in Chicago, Illinois, in 1927, he died in 1987. He was already dancing as a child with his parents on countless Vaudeville stages. After training as an actor he was soon appearing in shows on Broadway. His first choreography for “The Pajama Game” with music by Richard Adler and Jerry Ross was a huge hit. He celebrated his first success as a director with the Broadway production of ‘Sweet Charity’, whose adaptation for the screen starring Shirley MacLaine became his film directing debut. He won an Oscar for CABARET. He last appeared at the Berlinale in 1984 with STAR 80.

Associate producer Harold Nebenzal was born in 1922 and attended school in Berlin, Switzerland, France and the US. He served during World War II as a captain in the US Marine Corps. In the early 1950s, he began working in Los Angeles as a screenwriter and producer. He worked on films as diverse as Ingmar Bergman’s THE SERPENT’S EGG (1976), Billy Wilder’s FEDORA (1977) and Bruno Barreto’s GABRIELA (1982). Both Nebenzal and his father, producer Seymour Nebenzal have films in “The Weimar Touch”.