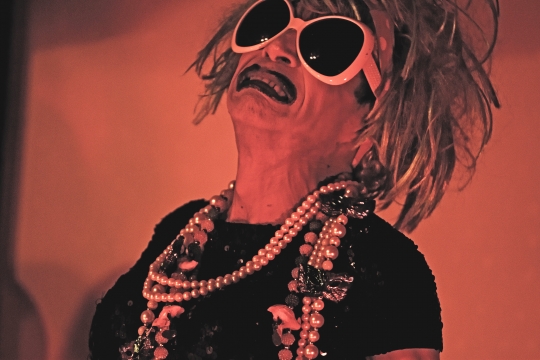 “What have I become? Me, a true 80’s creature?” is what the character played by João Carlos Castanha asks on stage, which could just as easily be directed at he himself: 52-year-old actor and transvestite João has his best years behind him. He’s ill, has lost both lovers and companions along the way and appears weary, even if none of this stops him from living the way he always has. João shares two rooms with his mother in a lower middle-class housing complex closed off to the outside; at night he performs in small theatres and gay bars. The film makes just as much time for solitary moments in shabby backstage areas as it does for João’s performances and his unforgettable face, exploring a milieu at once tender, brutal and cruel with precision, its fleeting glamour only skin-deep. Its complex layers of documentary observation, staged sequences and fictional elements coalesce into a story of life and death: while João imagines himself as having one foot in the grave and is haunted by the ghosts of his past, he doggedly continues to celebrate life. “I think I might go to hell. Hell is a rave. Aneternal rave.”

Born in 1988 in Porto Alegre, Brazil. He graduated with a degree in film from the Pontifical Catholic University of Rio Grande do Sul in Porto Alegre. Since then, he has made several short films as well as working as a curator and programmer for different cultural spaces and cinemas. CASTANHA is his first feature-length film.