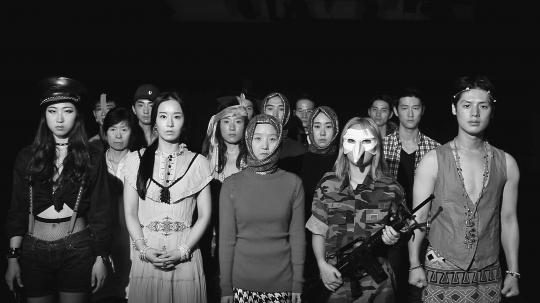 A man, striving for autonomy, lives in fear of being absorbed by his lover. Korea, the now: When Unk hits Boaz on his scooter, an amour fou takes its course in a performative ballad of dependency, which is intertwined with the staging of an ancient story.

Lior Shamriz (Hebrew ליאור שמריז; * September 13, 1978 in Aschkelon) is an Israeli film director and screenwriter. Raised in Ashkelon in an Arab-Jewish family, he moved to Tel Aviv at the age of 18. There he began making films and music and participating in collective art projects. He studied from 2002 to 2004 at the Jerusalem Film School and 2006-2009 Experimental Media at the Institute for Time-Based Media at the Berlin University of the Arts. During this time, he created about 20 films of various length and formats. a productive filmmaker, continuously producing experimental short films and two features, Lior Shamriz channels the fraudulent spirit of the 60s auteurs in his cinema of humorous / political deconstruction. He uses the cinema as the perfect place to discuss ideas - about being, truth, class, sexuality and others.