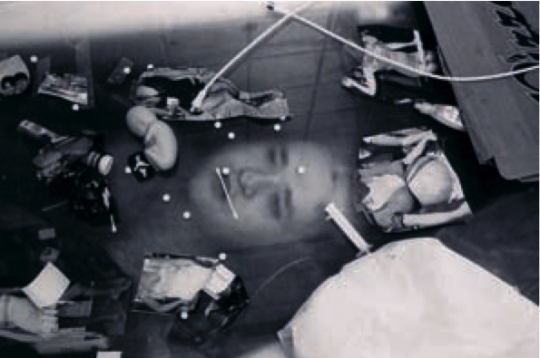 “A woman in a man’s body. A man in a woman’s body. Jesus in Mary’s stomach. The water breaks. It floods into me. I can’t close the lid. My heart is full.” So runs Lukas Moodysson’s description of his film that features a female voice - the soft-spoken Suada. This film is about Brad Pitt and Paris Hilton, David Beckham and Saddam Hussein; it also about sex and the war in Iraq, about homosexuality and homophobia. Descriptions of a full life led more in the realm of fantasy than in reality are accompanied by black and white images. The high contrast, grainy images show a man and a woman going about tasks that are far from routine; interactions that, in sum, do not so much add up to a story as a series of environments. Photographic collages are interspersed with semi-documentary scenes reminiscent of fluxus art of the 1960s, when – as the film also shows – all good commune-dwellers had group sex. “I, the undersigned,” states Luka Moodysson, “hereby state that CONTAINER is a film about the little darling that lives inside all of us. I hope seven people will take it to their hearts; one per year that has passed since I showed my first film here in Berlin. During those seven years every cell in my body has been replaced. I am new. I am the same. I am happy to be back.”

Born in Lund on 17.1.1969, he studied at the Swedish film school Dramatiska Institutet in Stockholm. He published several anthologies of poetry and one novel before making three short films and his first feature film, FUCKING ÅMÅL. This film was shown in the Panorama section of the Berlinale in 1999, as was his later film, ETT HÅL I MITT HJÄRTA (2004), which was nominated for the European Film Award. His comedy about life in a commune, TILLSAMMANS (2000) and his drama about youths LILYA 4-EVER (2002) were box-office successes in Europe.