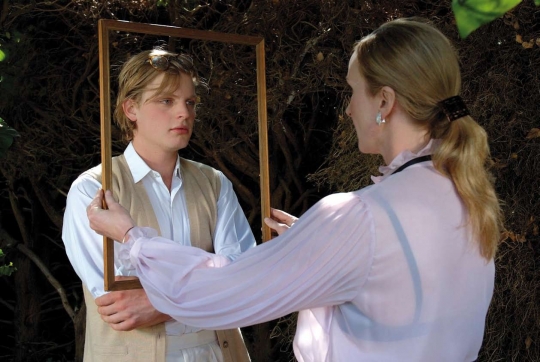 A director has organized for a young man named Conor to visit him at a meditation retreat to perform scenes from a story of his life. The young man has been given a tape with instructions: he must visit different rooms over the weekend, encountering five actresses who portray the key women in the director’s life.
Over the following days, the young man becomes familiar with the women and becomes familiar with the history of the director. This allows Conor to have the compassion to “play” the director and as the final scenes unfold, he must decide whether the performance has gone too far.

Artificiality and camp: homage to a style
Director‘s statement

Susan Lyons, who plays Verna in the film, had been a great muse of theatre director Richard Wherrett (upon whom the mysterious director in CORROBOREE is loosely based) and was also a friend who was there in his dying days. I also coincidentally cast Rebecca Frith and Luciano Martucci – who were the star-crossed lovers over a decade earlier in Wherrett’s production of "Romeo and Juliet" – as lovers in my short film VIOLET LIVES UPSTAIRS.
This concidental similarity in casting and the closeness the actors had to this mysterious director – now sadly gone – touched me and sparked my desire to make a film that explores the homosexual male’s deeply subconscious connecting of sex with death (and on some level, all humanity’s connecting of sex with mortality).
Although the film is fiction and not biography, I was keen to pay tribute to Richard and his work by casting Rebecca and Susan as two of the actresses rehearsing the imaginary fictional play in the life of the director who is dying of an AIDS-related illness. Not only are the actresses fighting for the life of the director, they are also fighting to keep alive an aesthetic that Wherrett and others pioneered in Australian theatre – sometimes affectionately known as a “camp” aesthetic: a theatrical style that lets the truth resound under the veneer of a consciously created façade. In fact, the artificial is sometimes better at hinting at sociological truth than the more transparent trope of “naturalism.”
The artificial aesthetic is commonly judged as superficial because it is an expression made outside the hegemony of the mainstream. This constant need to perform and play with the idea of a “mask” is often only understood by people from a minority who have had to spend a great deal of their time creating a barrier to avoid being vilified by the mainstream. Instead of being the victim, the appearance of happiness masks the pain and fear.
This concept of “beauty tinged with sadness” is an ancient philosophy in Japanese art translated as “mono no aware” (which means the awareness of the transience of all things -ed.). It is the idea that true art does not demonstrate the actual truth – but instead allows it to linger, just below the surface. This is an idea that I am keen to explore in my work.
The choice of a meditation retreat (similar to geisha retreats in Japanese literature) is no coincidence. The actresses perform a role similar to the unappreciated geisha in these love stories. And in essence, this film is a love story between the actresses and the director.
Ben Hackworth

Between performance and reality
About the film

A corroboree is a boisterous social occasion in Australian Aboriginal culture, meant to celebrate significant events requiring acknowledgement through sacred rites.
Living out his last days at an idyllic country retreat, a legendary theatre director decides to restage the key moments of his life. He does this in part to let the actresses devoted to him find some comfort in his death, and in part to memorialize himself.
The actresses assume characters from his past. Through a detailed recording message, the director has recruited a pretty young man named Conor to play himself, and instructed him to appear in various rooms at various times.
Conor gets off the bus with a rucksack and little idea of what awaits; we encounter the setting through his eyes. The first few scenes are awkward, with the women eager to mentor but still distant. They occasionally pull out the director’s writings to help him and to move the scenes forward. When the cast is “offstage,” there are casual moments of eating and lounging in the parlour. Costumes begin to appear, the demands of the performance grow more intense, Conor’s acting becomes better. Soon revelations about the director’s subject, his sexuality and his plans for Conor emerge.
CORROBOREE is a strange wonder. The film exists in an unstable world between performance and reality, without feeling forced or overly theatrical. We are always on the lookout for an interpretive path through its enigmas, searching for clues to its elusive structure and significance.
Director Ben Hackworth shows meticulous restraint in his first feature. Sustained static shots, sound driven by atmospheric noise and a pronounced quietness are favoured over traditional narrative devices, indicating a confidence and sense of urgency in this young director’s work. CORROBOREE explores weighty themes of sexuality, mortality and illness, but Hackworth does not take it all too seriously: the actresses nip at flasks and frequently flub their lines. This fine balance was apparently inspired by an actual theatre director’s work, and two of his actress-nurses appear in Hackworth’s film – another profound and subtle undercurrent in this exceptional work.
Noah Cowan, Catalogue of the Toronto International Film Festival, 2007

Notes on the Death of Beauty, Art and Talent:
A Correspondence with Ben Hackworth by Matthew Clayfield

Dear Ben,
First things first: CORROBOREE is, as far as recent Australian cinema goes, a bit of an anomaly. When you look at most of this country’s recent output, from SOMERSAULT (Cate Shortland, 2004) to KENNY (Clayton Jacobson, 2006) and back again, there are very few, if any, films whose approach can be considered unashamedly formalist. Yours, I would wager, can. Curiously, this makes it easier to situate in relation to recent world cinema than it does to that of its own country. In terms of world cinema, CORROBOREE shares much in common with a number of recent (and not so recent) pictures, and in some ways can be easily situated in terms of recent trends and preoccupations.
Formally, I found that the film had much in common with Gus Van Sant’s recent output, though not in the overly derivative way that Murali K. Thullari’s 2:37 - TWO THIRTY 7 (2006) does. The Pan-Asian style of, among others, Hong Sangsoo, Hou Hsiao-hsien and, in particular, Tsai Ming-liang also seems broadly relevant. Thematically, there are some resonances with Ingmar Bergman, as others have pointed out, though more intriguingly, at least in my mind, are its similarities with Michael Haneke. In particular, there seem to be important similarities between CORROBOREE and FUNNY GAMES (1997), with their shared, somewhat meta-cinematic comments on the role of the director.
At the same time, there are admittedly moments when the film seems to be acknowledging its predecessors in this country, as well. The most of obvious of these is Peter Weir’s PICNIC AT HANGING ROCK (1975), if only for the emphasis that both films put upon tone and mood over plot and character. I was also reminded by the central scene of the film, in which the characters sing Tom Waits’ “I Don’t Wanna Grow Up”, of Gillian Armstrong’s MY BRILLIANT CAREER (1979), which also has at its formal and thematic heart a scene of communal singing around a piano: Frank Hawdon (Robert Grub) sings “New Jerusalem”, which is all about achieving a kind of state of grace, thereby summing up the key concerns of the film itself. The connection between these films is no doubt accidental, but sometimes the accidental connections are the most revealing or fruitful. I wonder what you think.
Perhaps one of my favourite things about CORROBOREE is the way you shot the interiors, creating a labyrinth out of the house and never allowing us to get our bearings within it. The choreography of entries into and exits out of the frame at different planes within the image – the rhythmic nature of which is realised best in the opening scene of the film, in the bus depot – is particularly impressive. In this, I was reminded – and I know I’m clutching at straws here! – of films as varied and diverse as those of Jacques Tati and James Benning.
Matthew Clayfield

Dear Matthew,
Astute observations!
The formal approach of the film is more apparent, I think, because of the stripped-back narrative. I think when the filmmaker chooses to involve the audience less with the emotional pathos (or manipulation) of story, then the filmmakers’s approach to the subject and all formal aspects of filmmaking become more transparent for an audience. BU SAN - GOODBYE DRAGON INN (Ming-ling Tsai, 2003) is a perfect example and I think most of Tsai’s work embraces the long, wide frame and almost repetitious direction of choreography that creates an internal rhythm. The film becomes like a piece of orchestral music and the actors become the central motif, carrying the eye (and ear) through the frame. Interesting that you mentioned Tati, because I think Tsai takes a lot of inspiration from the French genius. I was conscious of both directors and how they were inspiring some of my choices for this particular project, although at no time did I imitate formal ideas with specificity.
In response to your mention of formalism, I also love story-based filmmaking, but because of the over-emphasis on the “story” dogma in Australia I wanted to be contrary and approach my first film from another angle. It wasn’t a conscious anarchistic statement; rather, all these stories, emotions and fears I had to express combined with my need to express them in a forum that was primarily artistic, and an overtly realist narrative wouldn’t allow for this.
Also, I didn’t want my first feature to be an artistic rendering of an overwrought coming-of-age or such. I needed to define myself in a longer form before committing to the world of compromise assured by the funding route: development, intention, pre-sale, star and marketing. I had to know that I could assert my confidence in a longer form.
I was very keen to make a film that was more about the internal wanderings of characters, stories and images than some of the more physically motivated dramas that Australia has been producing. So, I guess that’s my anarchistic side showing its true colours. Or perhaps I wanted to know that, no matter what I venture to make now, I can always return to my ‘formal’ roots. Perhaps this return will be at a time when the government and private infrastructure for independent art filmmaking is more kind. (...)
Ben Hackworth, www.sensesofcinema.com, 20. Juli 2007

Ben Hackworth was born on July 12, 1977 in Brisbane, Australia. He studied in the United States, at Amherst College in Massachusetts, majoring in English literature and theater studies. He then returned to Australia to study filmmaking at the Victorian College of the Arts in Melbourne. His short film Violet Lives Upstairs won the Australian Film Critics Circle award for Best Short Film. CORROBOREE is Hackworth’s first feature film.