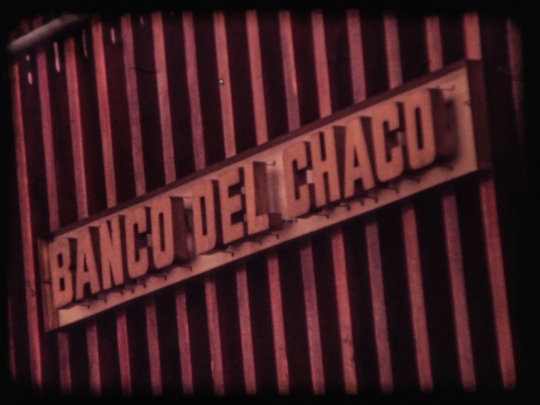 Albertina Carri wants to make a film about Isidro Velázquez, an almost mythical outlaw figure from northern Argentina who was shot dead by police in 1967. She’s not the only one interested in him: her sociologist father Roberto Carri wrote a book on him called “Pre-Revolutionary Forms of Violence” and a film was made about his story, although both father and film disappeared during the Dirty War. Legends, families, political alignments, cinema: none offer a stable foothold and Carri’s passage through them is like wandering a garden of forking paths, only to arrive at a landscape of cracked earth and thorns. Carri’s narration is anyway not what it might once have been, a mother doesn’t tell things the same way as a daughter. Legends, families, political alignments, cinema: each produces images and these are what appear on the screen, in one channel, three channels, five. It’s all material plucked from an archive and a wonderfully eccentric one at that: news reels, ads, home videos, interviews, movies, abstract forms. Images that could stem from old films, lost films, new films, possible films, impossible films; this is a film for which no other images will do.

Born in 1973 in Buenos Aires, Argentina. She studied Film Directing at the Universidad del Cine in Buenos Aires. In addition to working as a director, producer, and screenwriter, Albertina Carri is also the artistic director of Asterisco, the international LGBTIQ film festival in Buenos Aires.