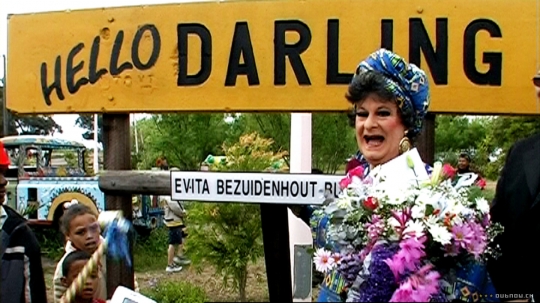 When the film’s director, Julian Shaw, was 15 years old he saw a show in Sydney that was to change his life. That night, just one entertainer took to the stage – a political satirist from South Africa named Pieter-Dirk Uys. A well-known opponent of apartheid, Uys soon became a dedicated activist against Aids. Uys’ alter ego is Evita Bezuidenhout, South Africa’s ‘most famous white woman’. During his performance in Sydney, Uys railed passionately and with irresistibly dark humour against what he described as the ‘new apartheid’ – for which he held the South African government responsible, because it had abandoned the next generation to fend for itself against the virus, unprotected.
After the performance, Julian Shaw approached the entertainer and asked him if he could make a documentary about him. Pieter-Dirk Uys agreed. This portrait is the result.
Under apartheid, Uys managed to disseminate the most hard-hitting truths about the country’s white minority government by placing them in the mouth of his most famous, heavily made-up creation – Evita Bezuidenhout. This persona of a critical drag queen was to make him a national celebrity. Today he has taken up the fight against Aids – and polarised the country. Pieter-Dirk Uys has performed his ‘Aids awareness entertainment’ to over a million schoolchildren, and has toured South Africa and Germany. The film intersperses footage of his performances with biographical sequences during which Uys, who is of Afrikaans-Jewish heritage, talks about his life and his career: “Nobody knows anything about me. Nobody knows anything about my private life and nobody comes into my home with a camera – except you.”

In 2011 Pieter-Dirk Uys received the SPECIAL TEDDY AWARD for his outstanding commitment especially in the educational advertising about HIV/AIDS in South-African schools and for his stage alter-ego Evita Bezuidenhoud, the “most famous white woman in South-Africa” as she was addressed by Nelson Mandela.

Julian Shaw (born 16 December 1985 in Wellington, New Zealand) is an author, filmmaker and actor, best known for directing the 2007 film Darling! The Pieter-Dirk Uys Story, a British Film Institute award-winning documentary about the life of South African political satirist Pieter-Dirk Uys. Shaw is the author of the novel Modern Odysseus, and the creator of several short films including Clearing the Air. He is the director of the 2011 feature documentary Cup of Dreams, about New Zealand’s national Rugby Union team the All Blacks. Shaw also gained worldwide fame in 2011 after starring in an Australian marriage equality advertisement entitled It's Time that has reached millions of people.