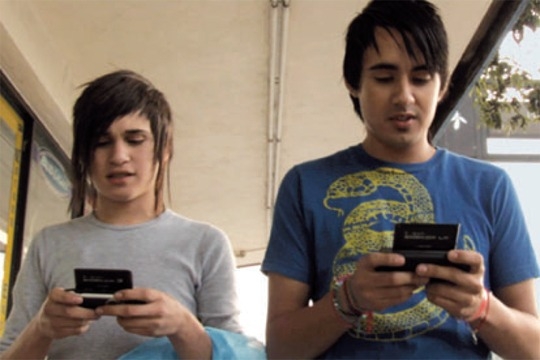 DISH observes the conversations of two adolescent Emos, Israel and Louie, in Los Angeles. The main issue is sex with other guys. Louie knows about it from personal experience, but Israel still needs to try. They are constantly exchanging text messages about the subject. While walking around their East Los Angeles neighborhood dishing about their high school classmates they talk about dicks, fucking, the use of condoms and the old cliché of top and bottom sex. After listening to Louie boast about his sexual escapades, Israel decides he has some catching up to do. But whatever happens, no one is allowed to touch his hairdo.

Born in Washington, D.C. in 1971, he studied journalism in Maryland and film and television at UCLA. In the early 1990s he worked in the foreign news department of ABC News in Moscow. He has produced numerous television programmes for ABC, MTV, PBS and Discovery networks. He lives in Los Angeles where he develops programmes for American and Russian broadcasters.