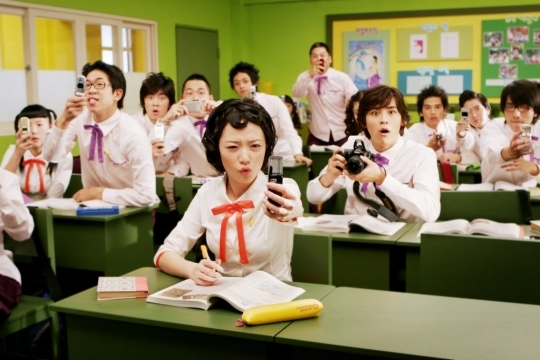 Fun, sex and lunacy. All hell's been let loose at No Use High School! Director E J-Yong puts a whole new curriculum together for his brilliant adaptation of an internet comic. Whilst the couple that run this somewhat unusual boarding school indulge their sado-masochistic longings, their multi-confessional pupils are busy educating themselves primarily in all kinds of sexual practices. At the centre of this off-the-wall revue of eccentric youths is Poverty Girl, who is somewhat of an outsider - even at a school as used to extremes as this one. Obliged to prostitute herself in order to afford the school fees, her clientele comprises largely old men. She is in love with an attractive young pupil named Anthony. A spoilt, snooty upstart, Anthony comes from a rich background and doesn't even notice Poverty Girl. Instead, his attentions are drawn by the younger sister of a one-eyed fellowpupil, Cyclop. When the little girl turns out to be a little boy this does nothing to dampen Anthony's enthusiasm. Just as unorthodox as the love life of this crew of bright young things is the colourful look of this bizarre teenage comedy, that takes the audience on a high-speed romp through a highly unpedagogical realm.

Born in Seoul, South Korea in 1966, he studied Turkish at Hankuk University in Seoul. Upon graduation, he went on to study film at the Korean Academy of Film Arts. His short film HOMO VIDEOCUS, made in collaboration with Daniel Byun, has won awards at international festivals. He made his directorial debut in 1998 with AN AFFAIR. His films UNTOLD SCANDAL, DASEPO NAUGHTY GIRLS, THE ACTRESSES and BEHIND THE CAMERA all screened in the Berlinale Panorama. The celebrity-filled drama MY BRILLIANT LIFE (2014) won an audience award at the Far East Film Festival in Udine.