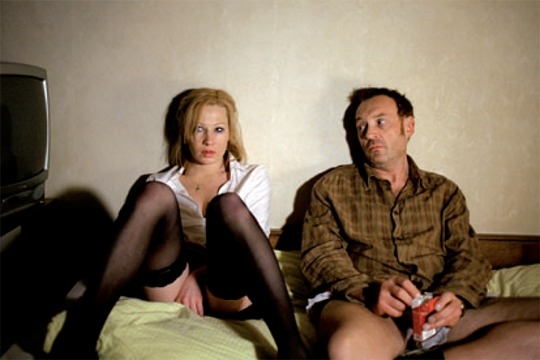 Horvath has disappeared. The final leasing instalments on his car haven’t been paid and this is why he must be found. Brenner accepts his old friend Berti’s lousy assignment and sets off on a long journey into the country. A forwarding address leads him to a fast food restaurant where, every week, thousands of bony remains of Viennese breaded fried chicken are left behind. These leftovers are ground into bone meal and added to the chickenfeed of future generations of fried poultry. No sooner does Brenner arrive on the scene than events come to a head. Horvath is still missing. So too is his car – although Brenner did at least catch a glimpse of it. Brenner begins to fall in love with kitchen manager Birgit, who is unfortunately married to the restaurant manager’s son. Brenner asks him to find out where the money goes that his Dad takes out of the till. It winds up in the hands of a prostitute in Bratislava – and in those of a pimp who is blackmailing the old man on account of a hushed up misdemeanour. The old restaurateur decides to add the pimp to his in-house food chain, and Brenner is asked to abduct the prostitute from Bratislava. No sooner does he return from his business trip, than things begin to get decidedly difficult for Brenner. The masked ball is in full swing at the village hall and the villagers – comfortably anonymous behind their masks – are letting it all hang out. Meanwhile, there’s lovemaking and murder going on down in the cellar. And then, all of a sudden, Berti appears. In the end there are corpses swinging in the cellar and wailing women – and Brenner’s just glad that he didn’t lose his head.

Born in Vienna’s Neustadt district on 13.11.1960, he studied screenwriting, directing and editing at the College of Music and Performing Arts. He has been working as a freelance screenwriter and director since 1990. He was a guest of the Berlinale in 2004 when his film, SILENTIUM, was shown, and again in 2006 with LAPISLAZULI – IM AUGE DES BÄREN