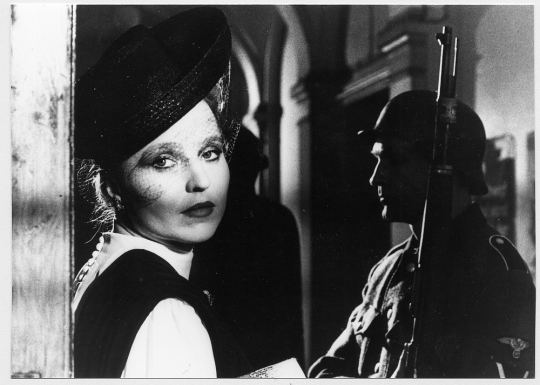 Maria and Hermann Braun get married during the Second World War. After half a day and just one night together, Hermann has to return to the front. After the war, he is reported missing. Maria alone believes that he's still alive.
In a bar reserved exclusively for American servicemen, Maria gets a job as a bar girl. She meets Bill, a black G.I., and gets pregnant. One evening, when she and Bill are in bed together, Hermann suddenly appears. In a fit of rage, he starts hitting Maria. She cannot bear to see Hermann in such a humiliating situation and hits Bill over the head with a bottle. His injury proves fatal.
At the trial, Hermann claims that he was guilty of killing Bill and is sentenced to prison. When she visits him in jail, Maria says: "I am going to get a job. And we’ll start living again once we are back together."
Maria has a miscarriage. Shortly afterwards, she meets Karl Oswald, a textiles manufacturer, on a train. Maria becomes his secretary, his assistant, his confidante. And eventually his mistress, too. Because she likes things to be open and above board, she tells Hermann about Oswald.
Maria becomes a successful business-woman. She owns her own house. When Hermann is released from prison, Maria arrives a little too late to collect him. He has left her a letter: "Because I love you, I need to make something of my life. As soon as I have, I shall come back and ask if you want to be my wife." […]

Born in Bad Wörishofen on 31.5.1945, he died in Munich on 10.6.1982. He began making films and stage plays in Munich in 1966/67. He directed his first feature film in 1969. An actor, dramatist, radio playwright and producer, he was the most productive force in New German Cinema. Today, all rights to Fassbinder’s works are owned by the Rainer Werner Fassbinder Foundation. The foundation’s aim is to preserve and disseminate the director’s comprehensive oeuvre.