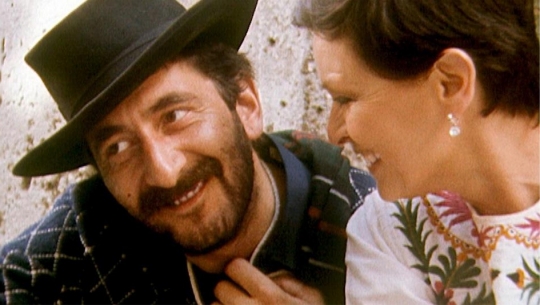 Film director Daniel Schmid was born in 1941. His father was a hotelier in Flims. A talented child, he was inspired by his grandmother’s stories and soon discovered the art of being expressive. Before long, the hall of his parents’ hotel became the stage for his own storytelling – a passion which was to remain with him for the rest of his life. After studying at the Freie Universität Berlin and at the German Film and Television Academy, Schmid went on to work with Rainer Werner Fassbinder, Rosa von Praunheim and Werner Schroeter. He also began directing films of his own: he adapted Fassbinder’s controversial stage play “Der Müll, die Stadt und der Tod” (SHADOW OF ANGELS, 1976) and before long began his emancipation from the German new wave. He created charming documentaries, such as the 1984 work set in a home for elderly opera singers, TOSCA'S KISS - IL BACIO DI TOSCA; autobiographical feature films such as ZWISCHENSAISON (1992) about his childhood memories of living in a grand hotel; and an iridescent comedy, BERESINA ODER DIE LETZTEN TAGE DER SCHWEIZ (1999) which poked fun at Swiss prejudices and clichés. At about the same time, Schmid began directing stage and opera productions.
Pascal Hofmann and Benny Jaberg’s film is a mysterious kaleidoscope of people and places; in it, the filmmakers take their audience on a sprawling cinematic journey through the life and work of one of Swiss cinema’s most extraordinary artists. As a child, Daniel Schmid knew only too well that there was a big, wide world behind the Flimserstein – a world poised between reality and fiction.

Born in Baden in Aargau on 23.3.1981. In 2002 he enrolled at Zurich College of Design. WINTERSONG, their first joint work, was shown at numerous international festivals. DANIEL SCHMID is their graduation film.