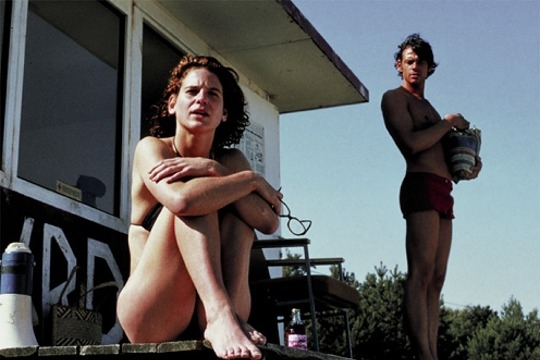 Germany in the 1970’s, Rita Vogt lives with an unshakeable belief in a better world. She wants to change something, so she and her friend Andi get involved with a terrorist. When people get killed, Rita goes into hiding in East Germany. The State Security Officer Hull aids her to disappear into a new identity there: a new name, a new job and new friends. When Rita falls in love with her colleague Tatjana, she believes she’s shaken off her past …

Wolfgang Kohlhaase: “The film doesn’t examine the topic in the form of a dramatised documentary. The events were meticulously researched, but the protagonists, their characters and the plot are all fictitious. It was like that, yes, but nothing was exactly like it is in the film.“

Oscar winner Volker Schlöndorff’s THE LEGEND OF RITA, written by Wolfgang Kohlhaase won the BLUE ANGEL (Best European Film) and two SILVER BER - LINALE BEARS for both actresses Bibiana Beglau and Nadja Uhl. Wolfgang Kohlhaase received the Honorary GOLDEN BEAR for his lifetime achievements in 2010. He is considered one of the most important script writers in German film history.

Born on the 31.3.1939 in Wiesbaden. Studied political science in Paris. Attended the Paris film school (IDHEC). Worked as AD to Alain Resnais, Louis Malle, Jean-Pierre Melville, among others. Directed his first film in 1966. In 1969 he set up the production company Hallelujah-Film (with Peter Fleischmann), and in 1973 BioskopFilm (with Reinhard Hauff). Golden Palm and Oscar for THE TIN DRUM (1979). Made films in France and USA after 1983. Managing Director of Studio Babelsberg 1992-1998.