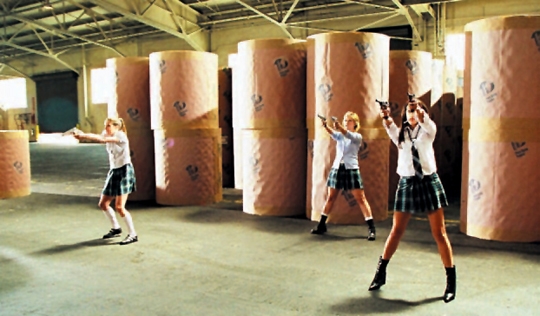 In the 562nd episode of a – fictional – television series, the D.E.B.S. find themselves up against a particularly tough opponent. The four schoolgirls, who also happen to be specially trained secret agents, are obliged to fight a former colleague, now bent on dominating the world. Then, the worst happens: one of the trio is kidnapped by the ex-D.E.B. and forced to have sex with her...

Angela Robinson: “I love all the comic book characters: Charlie’s Angels, Josie & the Pussycats... but I always wanted them to be gay and they never were, so I wrote my own.”

Born in San Francisco on 14.2.1971. After graduating, she attended Brown University in New York with the aim of becoming a stage director. She took up studies at the Graduate Film School at New York University in 1995. She has worked as an assistant to Spike Lee. Last year, she provided audiences with a foretaste of her feature film debut when she presented her short film, D.E.B.S., in the Panorama programme of the Berlinale.