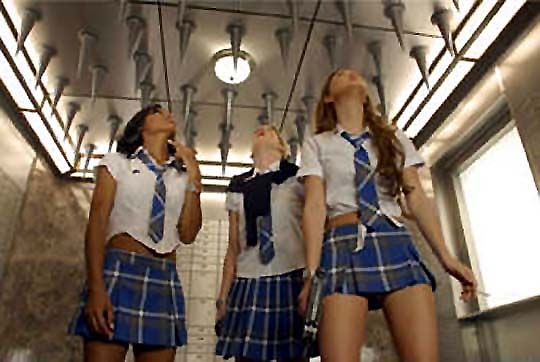 They are the most versatile, deadly, best trained – and certainly best-looking – troop of secret agents in the world. The D.E.B.S. are four young women who have been specially trained at a secret “academy” as part of an undercover government mission – after having been hand-picked for the job at inconspicuous nationwide academic trials to test their suitability.Dressed in their tartan mini-skirts and white socks they do not, at first sight, look like anything more than well-behaved schoolgirls. But, in reality, they are fighting at the forefront of national security. Max is their leader – a military genius and a tough cookie; Janet is the rather absent-minded baby of the family; French exchange-student Dominique is a chain-smoker and just crazy about boys. Amy, however, is the troop’s star agent. Not only did she attain top marks during the test, she also has the perfect boyfriend and a pristine personal file to boot. But then, during a particularly dangerous mission, she is kidnapped by Lucy Diamond. A jewel-mad bank robber, Diamond is the personification of all that is evil in the world: nobody who crosses her path lives long enough to speak badly about her. And then something incredible occurs: Amy falls in love with the D.E.B.S’ arch-enemy. In doing so she puts the existence of the whole group at risk…

Born in San Francisco on 14.2.1971. After graduating, she attended Brown University in New York with the aim of becoming a stage director. She took up studies at the Graduate Film School at New York University in 1995. She has worked as an assistant to Spike Lee. Last year, she provided audiences with a foretaste of her feature film debut when she presented her short film, D.E.B.S., in the Panorama programme of the Berlinale.