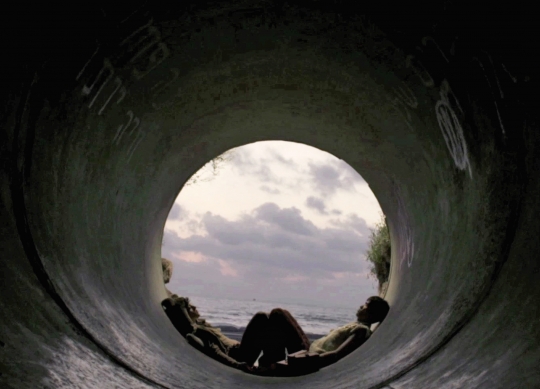 An old man is dying. His carer Noel sits quietly by his side. Dina, the man’s granddaughter, appears in an animal costume. She raids the fridge and then goes off to have fun with her friends. When she returns late at night, her grandfather is dead. Dina and Noel lovingly stroke the man’s hands, comb his hair, smoke a cigarette, share a laugh and then go out into the night time city. Loud electronic music awaits them in a club. As the sun rises they leap into the sea’s clear, cleansing waters. Their night of farewell is also a new beginning. Dina and Noel unconventional cinematic means to portray the attitude to life among young Israelis.

Born in Tel Aviv in Israel in 1987, she is known primarily in Israel as an actor but she has also directed numerous short films. Her short CHERCHEZ LA FEMME screened in the Panorama in 2009 as part of the FUCKING DIFFERENT TEL AVIV project. She also appears as an actor in the drama INCH‘ALLAH screening this year in the Panorama.

Born in Herzliya in Israel in 1986, she is due to complete her degree in communications at Shenkar College of Engineering and Design this year. She made her short film debut DINA AND NOEL together with Sivan Levy in 2012.