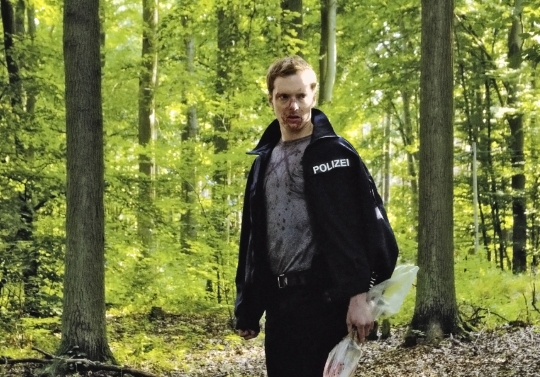 People in the Brandenburg countryside are scared of wolves. Their howling frightens the populace and silences the lambs. But once this night is over people will wish it had just been a wolf that had come to haunt them. Instead, a nightmare in the shape of a nameless stranger with a samurai sword appears at the edge of the forest and leaves a trail of destruction in the village. For young local police officer Jakob in particular the encounter with the warrior forces him to confront his own demons and face long-buried aspects of his personality and colourful fantasies of escape. Repressed since childhood, these fantasies now break out with awe-inspiring force. The more doggedly Jakob tries to maintain his moral armour and uphold his sense of law and order against the onslaught of the irrational, the more irresistible becomes his secret urge to accept his opponent’s gift – to give in to transgression with delicious abandon.

Born in Berlin in Germany in 1980, he grew up drawing comics and directing video and claymation films with friends. In 2004 he started studying direction at the German Film and Television Academy (dffb) in Berlin where he wrote and directed a number of short films which enjoyed success at national and international festivals and won several awards. Since 2005 he’s belonged to the Schattenkante filmmakers’ collective. DER SAMURAI is his graduation film.