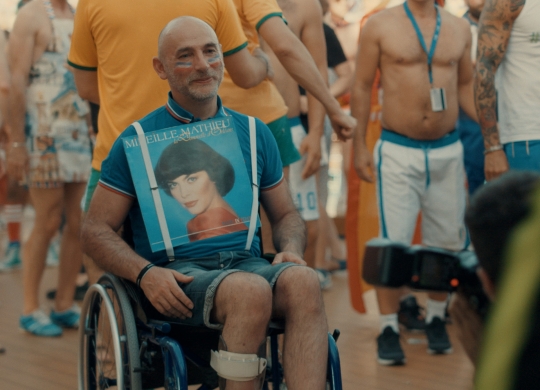 One week on a cruise ship, with parties, fun and new friendships. The all-gay clientele on board are preoccupied with topics such as identity, the body beautiful and the search for sex. Every evening is dedicated to a new theme, challenging the passengers to ever more extravagant, body-hugging outfits. In the cabins however, the talk is more than skin deep as the men open up about their private lives. Marek, a young Polish man just wants to be accepted and loved as a human being and not just because of his taut body. Dipankar from India has just recently come out; he and Palestinian Ramzi are revelling in the kind of freedom they can only dream about in their homophobic societies back home. Martin is HIV positive and ponders hedonistic ways, while Philippe from France observes the proceedings on board serenely from his wheelchair. In his feature film debut director Ferland Milewski succeeds in providing a look behind the scenes of an ostensibly superficial world. His humorous approach helps him create a genuine bond with the protagonists who talk openly about gay desires, free love and good old-fashioned monogamy.

Born in Berlin, Germany, he studied photography and film design at the FH Dortmund and has worked as a director since 1993. He has made numerous documentaries for MTV and VIVA. In 2008 he founded his own production company, Übervater Filmproduktion. He regularly lectures in documentary, story development and dramaturgy. His documentary series ‘Make Love – Liebe machen kann man lernen’, which he both wrote and directed, was nominated for a Grimme Online Award. He lives with his husband, dogs, cats, llamas and alpacas outside Berlin.