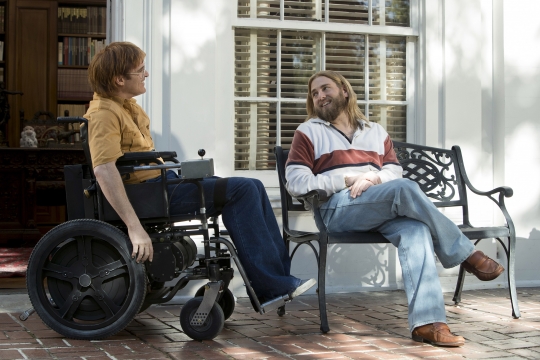 Don't Worry, He Won't Get Far on Foot

John has a penchant for off-colour jokes - and a drinking problem. And so, when somebody he met at a party suggests they go on an all-night bender in L.A. he simply can’t refuse. But after falling asleep in a drunken stupor on his drinking buddy’s passenger seat, he wakes up the next morning in hospital, a quadriplegic. Confined to a wheelchair for life at the age of 21, he now requires every last drop of his sense of humour to rediscover meaning in his existence. He is aided by Annu who brings back his lust for life, as well as Donny, a hippie whose unconventional Alcoholics Anonymous meetings draw together people from all walks of life and help them see things from a whole new perspective. John discovers beauty and humour in the depths of human experience and uses his artistic talent to turn these discoveries into brilliantly observed cartoons. Gus Van Sant’s biopic is based on the memoirs of cartoonist John Callahan. This is a tender, melancholy yet hope-filled and life-affirming fictionalised portrait of a life of limitations. As in many of his films, here too Van Sant addresses the search for identity in the environs of social subcultures and unusual milieus.