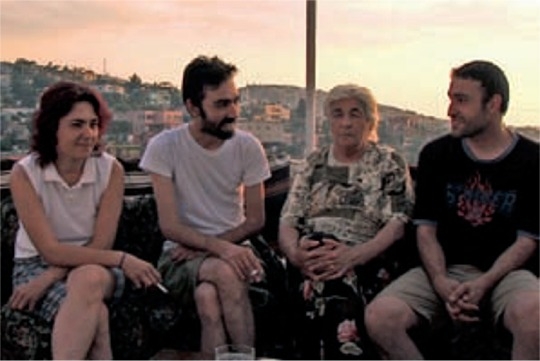 For those in the know Istanbul is something of a European gay mecca. How is this possible in present day Turkey? During the making of this film we were able to observe that, beyond the media, the discussion about Turkey joining the EU and the adoption of an increasingly Western lifestyle, a Turkish gay community has emerged that is self-confidently beginning to stand up for its rights. One member of this community is 28-year-old Kurd Mehmet Tarhan. Two years ago he was arrested and imprisoned for two years. Being gay he would have been deemed unfit for military service, but would have had to endure humiliating proceedings. A ‘contamination report’ would have been filed, certifying psychosexual abnormalities. The warrant for Mehmet Tarhan’s arrest has never been dropped, and his liberty is constantly endangered.
Güney, 28, dreams of one day becoming a “real male Oriental belly dancer” but currently spends his time as a transvestite-for-hire at a porn cinema, where he just about earns enough to get by.
Mert, 40, is going to leave Istanbul. He came to the big city as a young man when his family discovered he was gay.
Bawer, 25 also wants to make a fresh start. This charming, eloquent liar pretended to his parents that he was in a relationship with his good friend, Leyla.

In several episodes the film shows how the protagonists, each in their own way, try to adapt to life in a predominantly homophobic environment, attempting to fight for their rights and the freedom to live their lives as they choose.

Born in Malatya in Turkey on 20.6.1976, she grew up in Bonn. She began her career working in PR, photojournalism and as a stage director. In 1996 she took up studies in philosophy at Berlin’s FU. She has been attending the Berlin film school dffb since 2002.