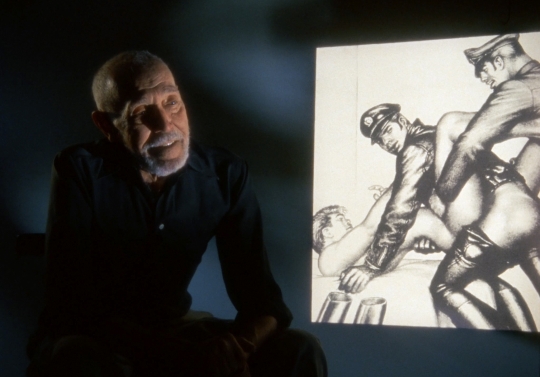 Daddy and the Muscle Academy

In the late 1940s, the artist Tom of Finland began turning his sexual fantasies into drawings. He gained world renown with the publication of his work in American men’s magazines. Gay men began to shape their bodies, look and entire self-image according to his idealised views of masculine-looking men dressed in leather or uniform. His drawings expressed a self-determined lust for life, liberated from any sense of guilt, which was perceived as a counterweight to social oppression.
This essayistic work is the only film about Tom of Finland in which he himself appears. In it, the artist talks about his experiences during World War II and the motivation for his work. Other artists, such as Isaac Julien, describe the fascination that Tom’s fetishist world exerts on them. A comprehensive retrospective of his drawings is juxtaposed with images of an underground cinema quality in which bodies move like gladiators to darkly mechanical techno sounds. Tom of Finland’s subcultural icons deconstructed mainstream perceptions of male homosexuals at the time; they still inspire the queer community today to understand the body as political destiny, to adapt it to one’s own identity and make it visible.