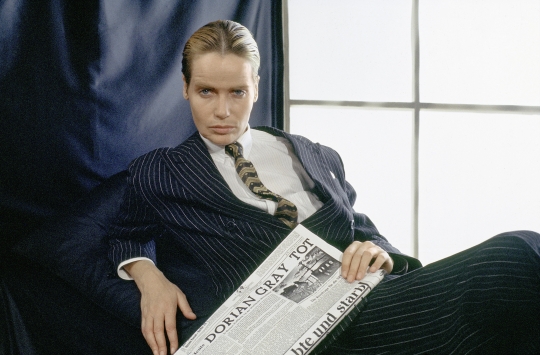 Frau Dr Mabuse, boss of an international media conglomerate, needs to boost circulation. She has decided to create an artificial character who will fulfil all her readers’ dreams, only to then destroy him before their very eyes. She chooses Dorian Gray. Dr Mabuse takes the rich, narcissistic dandy to the opera, where he falls in love with singer Andamana. He also cuts a dashing figure at the Press Ball, and on a journey through the underworld, with the coverage all the while earning Dr Mabuse tidy profits. But then this modern homunculus turns on his creator … Unlike her androgynous film hero, Ulrike Ottinger was definitely in attendance when “subversive aesthetics” was on the curriculum. Her futuristic media satire combines avant-garde art and triviality, underground and world cultures, video techniques and voodoo, all into a kind of world theatre, where all the hardened expectations of social and sex roles are thwarted with relish. In 1984, director Ottinger said, “for me, an emancipated society would mean that nobody would be subjected to expectations of their roles any more. Then there would be no more defamation of minorities”.