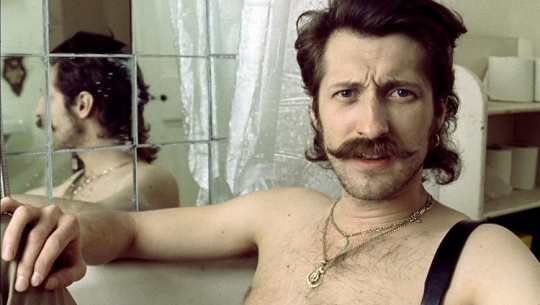 Andriy Krystiyan, or A. K. for short, has come to England from the Ukraine. A. K. is a philosopher (at least that’s what he claims to be), a poet, and an authority on all aspects of life. At the same time, he is following his grand plan to become an international star. Global stardom is how A. K. describes the goal that he and his band Gogol Bordello are pursuing with their particular brand of boisterous gypsy punk. For the time being, however, he makes ends meet by performing role play in women’s clothing for straight married men.
A. K. shares a flat with two young women named Juliette and Holly. Juliette dreams of being a kind of Florence Nightingale of the developing world. She is currently working behind the counter at the local drug store run by Sardeep, the Indian chemist. Holly is a trained ballerina. Her big dream is to dance with the Royal Ballet. So far she hasn’t been able to earn a single penny with her dancing, and continues to ‘polish’ her skills as a pole dancer at Beechman’s Exotic Gentleman’s Club.
These three distinctive personalities are at the centre of a cinematic tale of everyday life about people who are obliged to take on jobs just to earn a living, but who live in hope of one day fulfilling their dreams. But the paths to one’s goal are sometimes circuitous. And whether we take the path of wisdom or the path of filth, we will eventually arrive at the same enlightened place.

The remarkable, hyper-ambitious Material Girl who never stops reinventing herself, Madonna is a seven-time Grammy Award-winner who has sold over three hundred million records and CDs to adoring fans worldwide. Her film career, however, is another story. Her performances have consistently drawn scathing or laughable reviews from film critics, and the films have usually had tepid, if any, success at the box office. Born Madonna Louise Ciccone in August 1958 in Bay City, Michigan, she moved to New York in 1978 and studied with renowned choreographer Alvin Ailey, joined up with the Patrick Hernandez Revue, formed a pop/dance band called "Breakfast Club" and began working with then-boyfriend Stephen Bray on recording several disco-oriented songs. New York producer/D.J. Mark Kamins passed her demo tapes to Sire Records in early 1982 and the rest is history. The 1980s was Madonna's boom decade, and she dominated the music charts with a succession of multimillion-selling albums, and her musical and fashion influence on young women was felt around the globe. Madonna first appeared on screen in two low-budget films marketed to an adolescent audience: A Certain Sacrifice (1979) and Crazy for you - Liebe auf der Ringermatte (1985). However, she scored a minor cult hit with Susan... verzweifelt gesucht (1985) starring alongside spunky Rosanna Arquette. Madonna's next effort with then husband Sean Penn, Shanghai Surprise (1986), was savaged by critics, although the resilient star managed to somewhat improve her standing with her next two films, the off-beat Who's That Girl (1987) (although she did receive decidedly mixed reviews, they weren't as negative as those of her previous effort) and the quirky Damon Runyon-inspired Bluthunde am Broadway (1989). The big-budget and star-filled Dick Tracy (1990) had her playing bad girl "Breathless Mahoney" flirting with Warren Beatty, but the epic failed to catch fire at the box office. Taking an earthier role, Madonna was much more entertaining alongside Tom Hanks and Geena Davis in Eine Klasse für sich (1992), a story about female baseball players during W.W.II. However, she again drew the wrath of critics with the whodunit Body of Evidence (1992), an obvious (and lame) attempt to cash in on the success of the sexy Sharon Stone thriller Basic Instinct (1992). Several other minor screen roles followed, then Madonna starred as Eva Perón in Evita (1996), a fairly well received screen adaptation of the hugely successful Broadway musical, for which she received a Golden Globe for Best Actress. The Material Girl stayed away from the movie cameras for several years, returning to co-star in the lukewarm romantic comedy Ein Freund zum Verlieben (2000), followed by the painful Stürmische Liebe - Swept away (2002) for husband Guy Ritchie. If those films weren't bad enough, she was woefully miscast as a vampish fencing instructor in the James Bond adventure James Bond 007 - Stirb an einem anderen Tag (2002). After finally admitting that her acting days were over, Madonna began a directing career in 2008 with the barely remembered Filth and Wisdom (2008) and a year later she reunited with In Bed with Madonna (1991) director Alek Keshishian to develop a script about the relationship between the Duke of Windsor and the Duchess of Windsor that led to his abdication in 1936: the result, a movie named W. E. - Die Romanze des Jahrhunderts (2011), starring James D'Arcy and Andrea Riseborough as the infernal but still royal couple, was released in 2011 to lukewarm critics but it gathered one Oscar nomination for costumes and won the Golden Globe for Best Original Song for "Masterpiece".