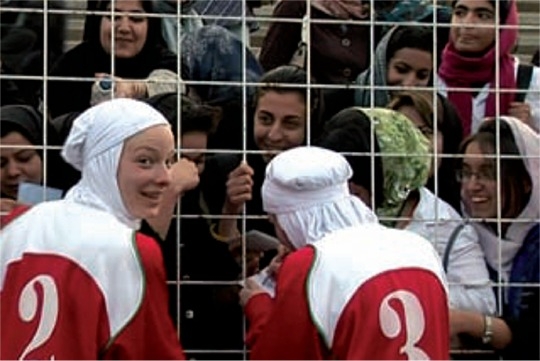 Teheran in April 2006. Iran’s national women’s team and a local Berlin women’s football team are playing their first official friendly match – before a crowd of more than a thousand cheering women. The atmosphere at the stadium is electric and super-charged with girl power. Outside the stadium, a few men peer through the fencing, trying to catch a glimpse of the
proceedings, because today, men are barred from the game.
Although their only desire was to play football together, it has taken the young women of both teams a whole year of bitter struggle to get where they are today. Theirs has been a battle against testosterone, arbitrariness and oppression. This film accompanies Marlene, left-back of the Kreuzberg club BSV AL-Dersimpor, and Iranian player Niloofar on their journey. Niloofar, who, as she says, does whatever she wants, dreams of Beckham and helps Marlene plan the big event. In Germany preparations are also under way and the girls set about learning about Iranian codes of behaviour. They don’t just want to play a game; they want to get to know each other and find out what it’s like to wear a headscarf on the pitch says Susu, who, like many of the girls in the team, is Muslim herself. An eight-hour plane trip away, Narmila and her mother kick a ball about on the street, their chadors and headscarves fluttering in the breeze. Although it’s impractical, they manage.
In spite of the game being postponed time and again, and the fact that the women are not able to play in Asia’s largest football stadium as planned, but on a dried up old pitch; and although Niloofar is forbidden from taking part in the game – for reasons which nobody understands – the girls refuse to be browbeaten. And, when the big day arrives, there’s singing and dancing on the grandstands. This 90-minute film is more than just a football game. The desire for self-determination and equality is being expressed here and, one thing is clear – change is possible.

born in Teheran on 23.9.1976, he studied stage design and founded his first theatre group in 1995 whilst still a student. In 2003 he founded the ”Arta Atelier” studio. He has created several films about Teheran as part of the studio’s multimedia works.

Born in 1978, he attended school in Berlin, Heidelberg, Jerusalem, Santa Monica and Constance. In 2001 he took up studies in media dramaturgy at Mainz University. He has worked on films, stage plays, radio projects and exhibitions