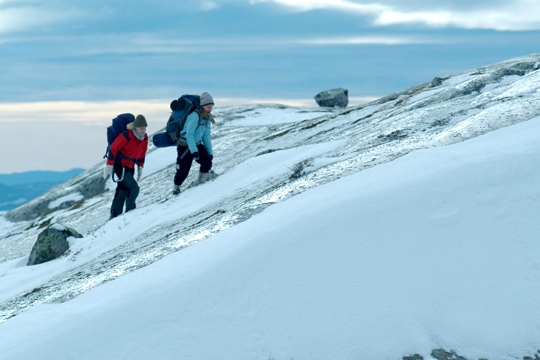 Two years ago, Nora and Solveig’s five-year-old son, Vetle, died on a mountain hike. Their grief over his death has weighed heavily on their relationship ever since. For Nora, the child’s biological mother, the pain of her loss has caused her to become increasingly bitter. Although Solveig loved Vetle just as much, Nora begins to question the sincerity of Solveig’s grief. The boy’s death has changed Solveig and she now finds that she can’t imagine a life without a child any more. But how would Nora react? Would it ruin their relationship if Solveig were to have a child? Together, the two women set off on a journey to the mountain where their child died. Solveig hopes that the trip will set in motion a process of soul-searching that will help them to cope with their grief and give their relationship a chance. But although their plan sounds sensible, in reality, it proves to be a painful process during which all their pent-up bitterness, hurt feelings and fears gradually surface. The closer the women get to the site of the accident, the more they seem to be drifting towards the end of their relationship. Each night, Nora and Solveig roll out their sleeping bags next to each other and each morning they continue their hike. Will Nora be able to work through her grief and move on? And will the two women manage to save their relationship?