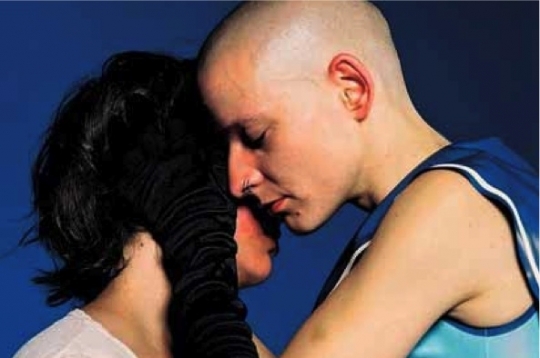 Fifteen queer crossovers: lesbian filmmakers from Berlin were asked to make a short film about their idea of male gay love and sexuality and, vice-versa, gay men were given the task of making a short film about lesbian sexuality and eroticism. All genres – animation, documentary, drama – were allowed. Filmmakers were also given a free hand in deciding which form their films would take – either experimental or conventional. The only parameters to which they were required to adhere were the length of each film – between three and seven minutes – and the format: MiniDV. The result is an anthology of highly diverse films, primarily concerned with the pinpointing, questioning and deconstruction of clichés – clichés which, in spite of the ostensible proximity of gays and lesbians during the past ten years, appear to persist to a shocking extent in the minds of many in the opposite group. The diversity of the various contributions provides good reason to hope for a thoughtful and informative expansion of our perceptions of certain roles and gender-specific patterns. Because, after all, we are not just fucking differently, we are fucking different. And that’s just fine the way it is. Production company press release

WHO IS AFRAID OF?
Direction: hollyandgolly

Born in Münster on 7.2.1959, he studied art history and philosophy in Freiburg and in Rome. Moving to Berlin in 1982, he studied film at Braunschweig College of Fine Arts (taught by Professors Büttenbender and Hein) from 1987-91. Since 1981 he has made over 60 films and videos, including three feature-length projects. In 1995 he developed an interest in digital art and interactive media. He has also been lecturing in media production and experimental film since 1990.

Biography Born in Paris on 11.5.1960, where she later took her final school examinations and passed her driving test. Lives in Berlin. Studied at the Berlin College of Arts from 1988-92. Received a bursary from the Karl Hofer Society.Took up film studies at the German Film and Television Academy in Berlin in 1992. Has made several short films and experimental videos.

Born on 24.3.1968 in Steinhöring near Munich. Lives in Berlin since 1987. Active in the fields of screenplay, direction, production and acting. Initially works as set designer and set designer. From the mid-90s actor also in international productions. 1993 directorial debut with "Prince in Hellland". 1994-98 contributions for the TV magazine "Liebe Sünde" follow. 2005 he is represented in the co-production "Fucking different".