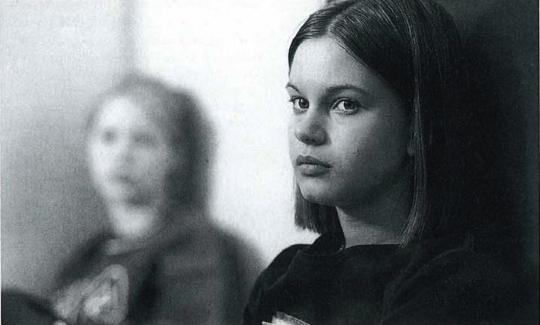 Åmål is a sleepy little town in Sweden and just about the most boring place on earth or, as Elin says in her inimitable fashion - „fucking Åmål!“ Agnes ist about to turn sixteen. She came here with her parents and her younger brother one-and-a-half years ago. She’s not been able to make any friends yet and, to top it all, at school she has to sit next to a girl in a wheelchair. Agnes has been in love with Elin, the blond-haired rebel of the school, for ages. However, nobody expect her computer knows it. Convinced that no-one will want to come to her party anyway, Agnes very reluctantly hands out the invitations her Dad has made for her. The big day arrives and Agnes’ Mum gets down to work in the kitchen. Come evening, Agnes’ parents and brother sit in the living room, waiting expectantly for Agnes’ guests to arrive. Meanwhile, Elin and her older sister Jessica are stuck at home, having been put under house arrest by their mother. Bored, they loll about on the couch; Elin has another ome of her famous self-pitying attacks and begins to bemoan her fate at having been condemned to such a miserable existence. What the hell can they do to pass the time? Before they know it, they find themselves on their way to Agnes’ party. When they arrive however, they discover that they are the only guests. Agnes’ mother offers them a glass of wine and shows them into Agnes’ room. Agnes, who is sitting in a huddle on the floor of the toilet, sobbing, doesn’t even realise they’re there. Left alone in Agnes’ room, Elin and Jessica have a look at Agnes’ computer. What they discover prompts Jessica to suggest a crazy bet to her sister: she’ll give Elin twenty krona if she dares to kiss Agnes! No sooner said, than done. When Agnes finally puts in an appearance, Jessica makes herself scarce and observes the kiss through a crack in the door. Agnes is still sitting on the edge of the bed, flabbergasted, when Elin and her sister burst out of the house, howling with laughter. Agnes is mortified. During the next few days at school she is the butt of a never-ending series of cruel jokes because the story has, naturally, spread like wildfire around the class. However, the super cool Elin soon feels racked with guilt for her low-down trick; moreover, she has to admit that the kiss did anything but leave her col . . .

Born in Lund on 17.1.1969, he studied at the Swedish film school Dramatiska Institutet in Stockholm. He published several anthologies of poetry and one novel before making three short films and his first feature film, FUCKING ÅMÅL. This film was shown in the Panorama section of the Berlinale in 1999, as was his later film, ETT HÅL I MITT HJÄRTA (2004), which was nominated for the European Film Award. His comedy about life in a commune, TILLSAMMANS (2000) and his drama about youths LILYA 4-EVER (2002) were box-office successes in Europe.