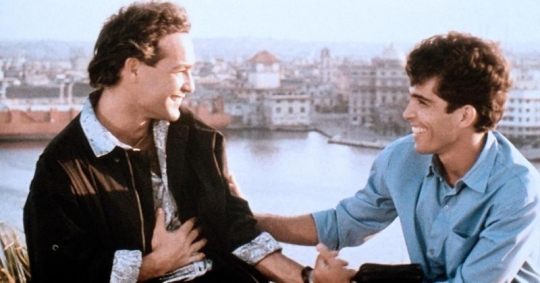 A man finds that friendship and understanding can span many boundaries - age, politics, and gender preference among them - in this comedy-drama from Cuba. David is a student and ardent Communist whose personal life is in something of a slump; his girlfriend recently left him to marry another man after he took her to a hotel in hopes of seducing her, and she announced that she couldn't believe anyone could make love in such an ugly room. One day, David stops by the park and gets some ice cream, where he meets Diego; as if his flamboyant manner wasn't announcement enough, David is convinced that Diego must be a homosexual because he's eating strawberry ice cream, even though it's one of the rare days when chocolate is available. David is less than impressed with Diego's open criticism of Castro's regime (especially the government's persecution of gays), but he accepts an invitation to visit Diego's apartment; while David realizes that Diego has seduction on his mind, this is outweighed by the knowledge that Diego's flat houses such forbidden pleasures as {~Time} Magazine, American record albums, and Johnny Walker Red scotch. David's friend Miguel is convinced that Diego is a dangerous dissident and urges David to spy on him and pass along his findings to the government. But the more time David spends with Diego, the more he finds that he's intrigued by this very different man, and that he enjoys spending time with him; David also finds he likes Nancy, Diego's sexy neighbor. Helmed by legendary Cuban director Tomas Gutierrez Alea and based on a story by Senel Paz, FRESA Y CHOCOLATE was the first Cuban film to be nominated for an Oscar (Best Foreign Language Film of 1995); it also won honors at the Berlin International Film Festival (Silver Bear) and the Sundance Film Festival.
(Review Summary New York Times, Mark Deming, Rovi)