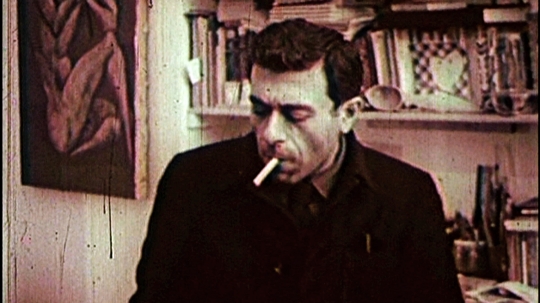 Bahman Mohassess was a celebrated artist at the time of the Shah. Trained in Italy, he created sculptures and paintings in his homeland. But audiences often took offence at the pronounced phalli on his mostly naked bronze figures and his work was regularly censored. All traces of him were lost after the revolution. It was said he destroyed his remaining paintings and disappeared. Mitra Farahani, who began her career as a painter, finds Mohassess in a hotel in Rome. The old man is flattered by her interest in his life but also has very clear ideas about how his words and life should be illustrated. His unshakeable humour is nevertheless infectious and his critical faculties fascinating. Almost incidentally, the topic moves towards art and homosexuality. Farahani wants to film Mohassess at work and discovers two brothers who commission a new piece from him. Enlivened by the encounter with these two young Iranian collectors, the artist energetically discusses his grand plans and drives a hard bargain for his last work of art.

Born in Tehran in Iran in 1975, she graduated in graphic design from Azad university in Tehran in 1997 and then emigrated to Paris where she worked in performance and fine art, documenting her art practice in TABLEAU DE BOIS. She studied at ENSAD in Paris from 2000. Her short JUSTE UNE FEMME won a Teddy Award at the Berlinale in 2002 and TABOUS – ZOHRE & MANOuCHEHR screened in the Panorama in 2004. In 2009 she was arrested by the Iranian government on her return to Tehran.