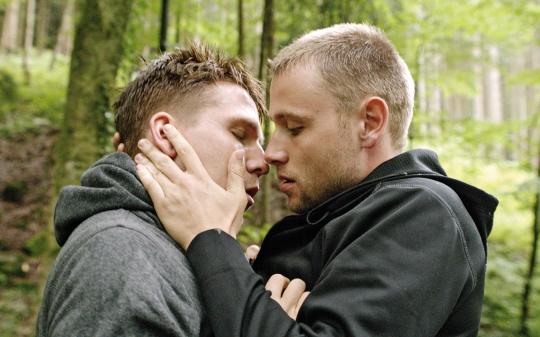 Marc is shaken to the core when he meets a fellow police officer, Kay, on a trainingcourse and begins to develop feelings for him. When Kay asks to be transferred to Marc’s unit, his well-arranged life begins to sink into chaos. Torn between his love forhis pregnant girlfriend Bettina and the rush of a completely new experience, his life begins to spin increasingly out of control. He soon finds himself increasinglye stranged from his family, but running away with Kay is not an option. When Kay one day disappears without warning or leaving an address, it dawns on Marc that his absence has ripped a gaping hole in his life. With his life in free fall, Marc can no longer satisfy everyone's expectations - least of all his own.

Born in Essen in Germany in 1972, he grew up in the Ruhr region. He studied theatre, film and television in Bochum and Cologne and later directing at the Stella Adler Acting Conservatory in New york and at the Ny Film Academy. He has also participated in a Frank Daniel screenwriting seminar, a directing seminar with Judith Weston, the International Filmschule (IFS) screenwriting programme in Cologne and, in 2003, the Berlinale Talent Campus. His short and documentary films have screened at various international festivals. He currently lives and works as a screenwriter and director in Berlin.