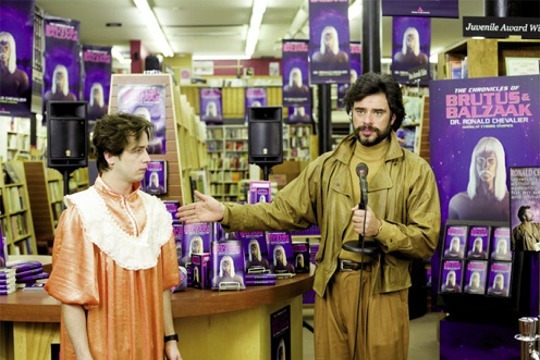 Perhaps the fact that Benjamin lives in a geodatic dome accounts for his ability to write such marvellous science fiction stories at the age of 17. His mother, an ambitious nightdress designer who is currently working on a new collection gloriously entitled ‘Decent Beginnings’, has precious little time for him. Benjamin, who is home-schooled, has very little contact with the outside world – and this serves to fire his imagination still more. There’s no room for small town routine in the far-off galaxies that Benjamin inhabits. But then one day Benjamin learns that his idol, sci-fi legend Dr Ronald Chevalier is to hold a writing workshop at the famous Cletus Festival and Benjamin decides it’s time to make contact with ground control again. Determined to take part in the workshop, he picks up his best manuscript, “Yeast Lords: The Bronco Years” and fate takes its course. The workshop has drawn the region’s most creative and talented writers, including Tabatha, with her love stories, and up and coming director Lonnie, who already has a filmography of some 80 titles to his credit. The workshop has astonishing consequences for Benjamin: Lonnie promises to turn his entire novel into a lower-than-low-budget film and, clearly impressed by Benjamin, Dr Chevalier himself decides to publish Benjamin’s manuscript – with a few alterations – as “The Chronicle of Brutus and Balzaak”. And so, before long we are treated to several very different versions of Benjamin’s story, namely: an underground film, a mainstream bestseller à la Chevalier and, finally, Benjamin’s own original version.

Born in Preston, Idaho on 18.7.1979, he studied at the Mormon Brigham Young University in Provo, Utah, where he met his wife and co-writer, Jerusha Hess. The couple has two children and lives in Salt Lake City.