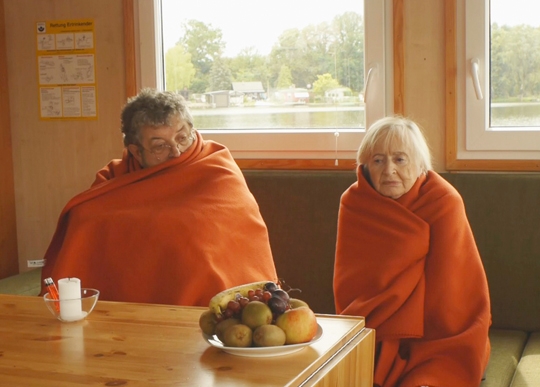 Petite but agile eighty-two-year-old Maria Schmidleitner is going to spend some time on a houseboat in rural Brandenburg with her obese son Peter (63). As they are in the car on the motorway on their way to the boat Peter insists on picking up a young hitchhiker against his mother’s wishes, but when the young man only exacerbates the perennial mother-and-son conflict he is quickly dropped off again. No sooner are they on board the houseboat than Mum turns her son’s afflictions into her weapon and drives Peter crazy with her constant questions about his blood pressure and glucose levels. But all Peter wants is her love. His late coming out, her sentimental memories of Hitler and their constant arguments, but also their affection for each other come to an abrupt end when the boat’s motor conks out. With their boat disabled and mother and son in a state of complete panic, they suddenly discover a stowaway on board. While Peter feels drawn towards the stranger, his mother fears the loss of civilisation and all she holds dear in her homeland. All at once, her petty personal terrordrome becomes an entire world of violence and murder. In GLAUBE, LIEBE, TOD Peter Kern criticises both the fear enshrined in the ‘clash of civilisations’ mentality and the inability to love.

Born in Vienna, Austria in 1949, he was a choirboy and stage actor and began working with Rainer Werner Fassbinder in 1973. In 1978 he won a German Film Award for his performances in HITLER – A FILM FROM GERMANY and FLAMING HEARTS. He directed his first feature film, CRAZY BOYS, in 1986, and has appeared in films by Werner Schroeter, Hans-Jürgen Syberberg and Christoph Schlingensief among others. FIFTYFIFTY screened in the Berlinale’s Short Film Competition in 2001 and BELIEF, LOVE, DEATH in the Panorama in 2012.