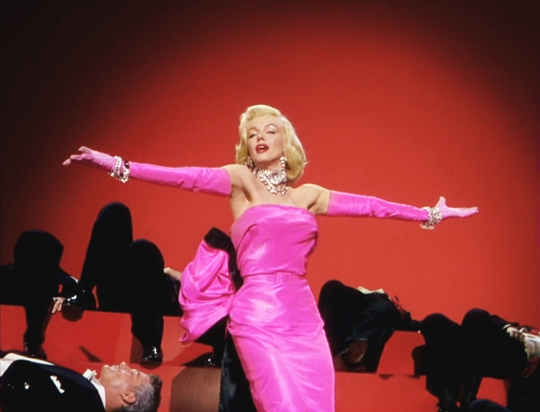 As New York showgirls Lorelei Lee and Dorothy Shaw travel to Europe, they are shadowed aboard
ship by private detective Ernie Malone, hired by the disapproving millionaire father of Lorelei’s fiancé.
Lorelei’s material girl behaviour makes it easy for Malone to find proof of her alleged “infidelity”.
Meanwhile, Dorothy falls in love with the detective … Much like the private eye’s preferred potable
(“just equal parts of scotch, vodka, brandy, and gin”), the film mixes the seemingly incompatible
for Marilyn Monroe’s stunning performance of “Diamonds are a Girl’s Best Friend,” in this case the
colours hot pink, red, violet, and orange. The result was the birth of “camp”. What its trailer called “the
most glamorous musical of our age” celebrated Technicolor as one component of a dazzling work
of art or, as Cole Porter put it in a verse cut from the final version of Silk Stockings (1957) because
it was deemed “unacceptably vulgar”, “If Zanuck’s latest picture were the good old-fashioned
kind, / There’d be no one in front to look at Marilyn’s behind / If you want to hear applauding hands
resound / You’ve gotta have glorious Technicolor / Breathtaking Cinemascope and / stereophonic
sound”.
Videos
Watch trailer on YouTube

Howard Winchester Hawks (* May 30, 1896 in Goshen, Indiana; † December 26, 1977 in Palm Springs, California) was an American director of the classic Hollywood era. Hawks distinguished himself across genres as one of the most important American film directors of his generation. He created important classics such as Scarface (Gangster film), Leopards don't get kissed (comedy), The Dead Sleep Soundly (film noir), Rio Bravo (western) and The Thing from Another World (science fiction). For his life's work the director received an honorary oscar in 1975; two years later Hawks died at the age of 81.