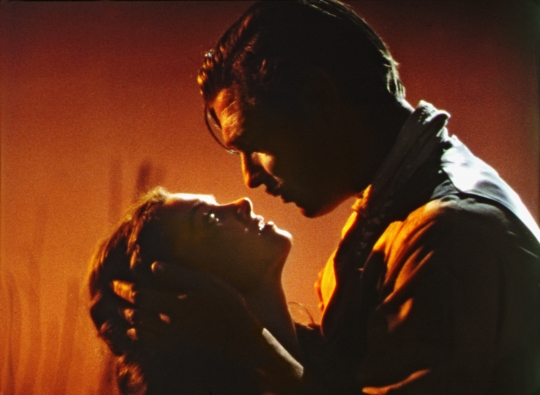 Gone With the Wind

It’s the American south in 1861 and Scarlett O’Hara is in love with her neighbour Ashley Wilkes.
When he announces his engagement to his cousin, southern belle Scarlett marries in spite, but is
soon widowed by the Civil War. Only adventurer Rhett Butler knows of her secret love for Ashley.
Yet he courts her nonetheless. And Atlanta comes under siege by the Union army ... The film is a
spectacle of superlatives, including its use of colour. To shoot the burning of Atlanta, the production
used seven Technicolor cameras, every one in existence. Production designer William Cameron
Menzies received a special Oscar for his use of colour, “not only fences and ruins were painted
black but acres of grass were blackened. No attempt was made to make Gone With the Wind pretty.
When unpleasant colours were inquired to enhance the drama, they were used. Red skies and indigo
backings were planned for a macabre, strong and unhappy atmosphere”. It was all part of David O.
Selznick’s plan, “this picture in particular gives us the opportunity occasionally – as in our opening
scenes and as in Scarlett’s costumes – to throw a violent dab of colour at the audience to sharply
make a dramatic point”.
Watch Trailer on YouTube

Victor Fleming (February 23, 1889 – January 6, 1949) was an American film director, cinematographer, and producer. His most popular films were The Wizard of Oz (1939), and Gone with the Wind (1939), for which he won an Academy Award for Best Director. He showed a mechanical aptitude early in life; while working as a car mechanic, he met the director Allan Dwan, who took him on as a camera assistant. He soon rose to the rank of cinematographer, working with both Dwan and D. W. Griffith, and directed his first film in 1919.
Many of his silent films were action movies or Westerns. Because of his robust attitude and love of outdoor sports, he became known as a "man's director"; however, he also proved an effective director of women. Under his direction, Vivien Leigh won the Best Actress Oscar, Hattie McDaniel won for Best Supporting Actress, and Olivia De Havilland was nominated.
source: wikipedia.org