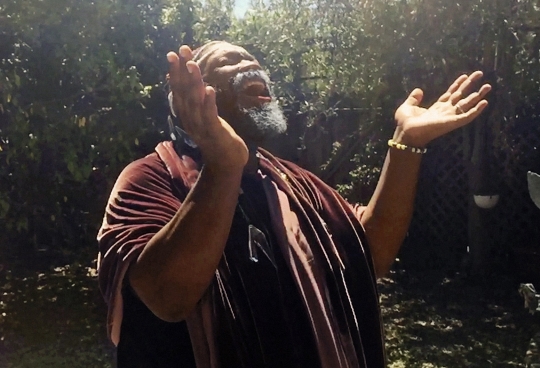 Girl Talk features poet and critical theorist Fred Moten dancing in slow motion, or ‘dragged time’, to an a cappella rendition of Betty Carter’s jazz standard “Girl Talk”, here reinterpreted and performed by musician Josiah Wise. Wearing a velvet cloak covered in jewels, Moten turns euphorically in a sunlit garden as the crystals adorning his body refract pink, blue, and green rays. In exploring the figure of the drag queen and the mother, Moten and Tsang, poet and artist, remain unfixed in any one persona.

Wu Tsang, born in 1982 in Worcester, USA, lives and works in Los Angeles. Tsang is an artist, performer, and filmmaker. She studied at the School of the Art Institute of Chicago (BFA, 2004), and at the Interdisciplinary Studio at UCLA/University of California (MFA, 2010). Her films, performances, and installations have been presented at museums and film festivals internationally. Tsang is a 2014 Rockefeller Bellagio Creative Arts Fellow and a 2015 Creative Capital Fellow.