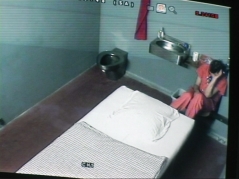 In the world of fetishes there’s a niche for every type of proclivity. Arwed caters to a special type of customer: he runs a private prison where he is happy to find all sorts of ways to bully and victimise his paying guests on the other side of the bars. As prison director he is master of ceremonies; during the course of one week, he and his partner Dennis help fulfil their prisoners’ wildest fantasies. The inmates treat the days and nights they spend in handcuffs [...]

Hakie is 71 years old and lives self-sufficient in a hamlet in the Albanian Alps. Everyday life in this rural seclusion is marked by an archaic separation of male and female roles. After the death of his parents, Hakie inherited the house and farm and has lived on her own ever since. She works in the house, on the meadows and in the fields. A way of life, which is usually denied to a woman here, would not be the prophecy. Is Hakie a man or a woman? Hakie is a "Burrnesha", a sworn virgin. [...]

He is young and works for Israeli military intelligence. On headphones, he listens in on the conversations of Palestinians. The phonecalls of one gay couple in particular begin to fascinate him more and more. Privy to the complicated relationship between the two as it unfolds, he doesn’t know whether and, if so, in what way he should follow his feelings. For here, too, the private is political, and the most intimate things of all can lead to disaster.

Happiness For One Day 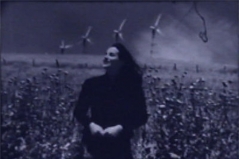 Based on the memoir by Mary MacLane, proto-feminist flapper. A burning testimonial to the desire of a young woman at the beginning of the 20th century for life and otherness.

When karate champ Andreas Marquardt thinks about himself he feels nothing but bitterness: ‘I refused to feel anything. I was cold, like a block of ice, I couldn’t give a shit about anything.’ When he was two years old, his father poured water over him and put him outside on the balcony in subzero temperatures. Another time he crushed his hand. When he was six, his mother began to seduce him: ‘Your prick belongs to me, my little friend.’ Later, Andreas became a pimp [...] 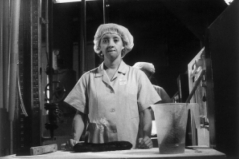 Both the machines and the staff at the bread factory run like clockwork. The girls are always on the go and their piece rate is bang on target. The new girl, however, number 423, is having a hard time getting to grips with the machines. She’s fighting a losing battle, it seems. But we shall see who will win in the end. 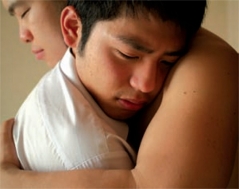 Tadashi is about to take his final school examinations. Unbeknown to anyone, he has fallen in love with his fellow-pupil, Kota, and doesn’t dare to tell anyone. One hot summer’s day, some of the other schoolboys taunt him, calling him a ponce. This destroys all hope he ever had of getting together with Kota. Thoroughly depressed, Tadashi meets a gay couple on the train. Hiroki and Sinji are fascinating; their conversation is so stimulating that, before he realises what he is doing, [...] 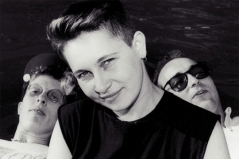 In 1985 there were three known homosexuals in Israel and by 1998, 3000. In this short, intense and dramatic period Israel goes through the fastest, most colourful revolution of the late 20th Century. Not a bloody revolution, rather a coming together of academics, prostitutes, transsexuals, singers, hairdressers and army officers, marked by personal tragedy, hopes, challenges, setbacks and sudden breakdowns. Director Yair Quedar, ex-soldier and then member of the movement followed the revolution [...] 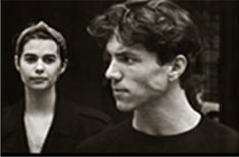 Short tale about the violent impulses of the young, gaybashing, and losing control. (IMDb)

A fishing cove on an island fallen out of time and space, almost like the rocky island in Michelangelo Antonionis L'Avventura (1960). Nature is not merely decoration, but an active force of events. Ships appear in the distance, but do not dock. Here is where Gabriel works with a small group of young men. They amuse themselves in an age-appropriate way, but also talk frequently of the devil and are magically drawn to a cave. Out of nowhere, an androgynous creature appears called Héctor. [...]

Hedwig And The Angry Inch 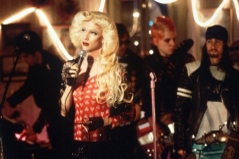 Once upon a time, Hedwig’s name was Hansel and he lived in East Berlin before the fall of the wall. A lonely boy who found his only solace on American Forces Network radio and in western rock music, Hansel had but two dreams: to become a rock star and to meet his ‘other half’. Could it be that he has found him in the shape of this American GI, who has promised him love and freedom in the United States? Since the GI even wants to marry Hansel, he decides to undergo a – sadly [...] 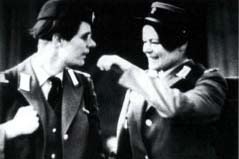 One of those wars between France and Germany. Two Lady soldiers, one German, one French, are lost in the woods. An encounter is inevitable . . .

Cesar Oiticica Filho's first film is a visually striking found-footage documentary about the filmmaker's uncle, Hélio Oiticica (1937-1980), one of the most important Brazilian artists of the 20th Century. Foregoing voiceover narration and expert analyses, the film allows Oiticica himself to narrate his life and expound upon his art in his own words, and in extremely rare archival audio and visual material. The artist's commentary guides us through his artistic development and [...] 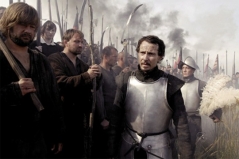 Sixteenth-century France. Europe’s most powerful state is being torn apart by religious wars. On the one side is the Catholic majority which holds sway over the Parisian court and, on the other, are the Protestants, known as Huguenots. Paris is ruled by Catherine de Medici who is determined to make use of her power to retain the throne for her three sons. But, in the south of France, in the tiny kingdom of Navarre, an opponent is emerging about whose existence she has, as yet, no knowledge: [...] 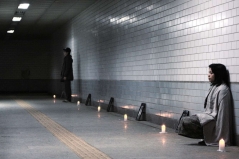 Some landscapes have been abused to such a degree that they make their inhabitants strange and lonely. Honghae in rural South Korea has this effect on Ji-Young, a female installation artist who feels like and wants to be a man. She, at any rate, blames her secret transgender existence on the wasteland where she grew up when she returns there from the Philippines with the shy young Rain. The two met each other at an agency specialized in procuring South Asian mail-order brides for Korean men. Searching [...]

Engl. Title: Before We Grow Old

Summer in Berlin. Two Berliners, Maria and Niels, and one British student, Chloë, are three twenty-somethings. Drifting libidinously through Berlin, they plunge headlong into a carefree and chaotic love affair with each other. Boisterously living life to the full, they grasp everything and anything they please. Their only compass seems to be the pleasure they experience together – which works perfectly well until Chloë unintentionally falls pregnant. Insecurity and anger, jealousy [...]

'I'm not trying to escape who I am. This is it, I was born in this body and I can’t escape it, no. Am I angry at what it is? Yes.’ An innocuous idea, since you can assume it would never actually happen: finding yourself in someone else’s body. Yet that is exactly what befalls Lexi and her friends during a camping trip. The shock is immense, especially given the friction that had already existed before the inexplicable event: not only between the three [...] 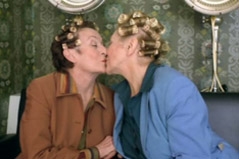 Two elderly ladies meet unexpectedly at a hairdressing salon one day. Maya recognises Charlotte, and Charlotte recognises Maya. But Maya pretends she doesn’t know Charlotte. Their unexpected meeting reawakens memories of their youth together and the two women find themselves confronted with a story from way back in their past, of which they’d rather not be reminded... About the film 70-year-old Charlotte (Heidi Diggelmann) has been a regular at Carlo’s hairdresser’s [...]

Engl. Title: The Way he Looks

Giovana is Leo’s best friend. They spend their afternoons at the pool, awarding points for the level of their boredom and just hanging out. But there are limits to their intimacy. Leo is rather self-contained; even his schoolmates’ barbs can’t cause his sense of his own independence to waver. Tired of his parents’ over-protective attitude, this blind fifteen-year-old decides to determine his own life and applies for a school exchange. The arrival of a new pupil at school [...] 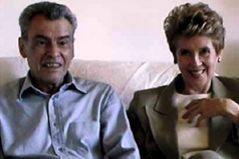 My father was somebody who did not enjoy talking about himself. Although many a star of his generation has written an autobiography, he never felt inclined to do so. In order to encourage him to talk about his life, I decided to interview him. From 2001 until his death in March 2004, we recorded several hours of conversations during which he opened up to me as he had never done before. This material provided the basis for this documentary. My father was a man fraught by many a contradiction. The [...] 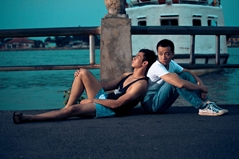 Saigon can be a very cold place. And yet this pulsating urbane megacity spells hope and desire for Khoi, who has escaped from his rural background. This is the place where this twenty-year-old embarks on a classic journey of initiation from innocence to experience and maturity. His search for somewhere to live brings him in contact with Dong, a smooth operator who agrees to take him in. At Dong’s apartment Khoi meets Dong’s boyfriend, Lam. The two men steal everything the newcomer [...] 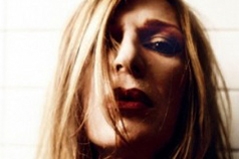 Chantal is the manager, hostess and stage-hogging front woman of ‘House of Shame'-Party. In this documentary, filmmaker Johanna Jackie Baier tells her story. It begins with Chantal’s escape to Berlin from the confines of a small country town in southwest Germany in the autumn of 1980. Interweaving interviews and portraits, but also on- and off-stage stories, backstage gossip, copious amounts of music and excerpts from her shows, the film allows Chantal’s story to unfold before [...] 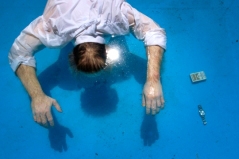 Michael Elmgreen and Ingar Dragset are a Danish-Norwegian couple, both artists, who have been working together since 1995 and have had a joint studio in Berlin since 1997. Michael Elmgreen was born in Copenhagen in 1961 and Ingar Dragset was born in Trondheimin Norway in 1968. The couple’s work is shown internationally; in Germany they gained a name for themselves for the memorial in memory of homosexual victims of the Nazi regime that was unveiled on 27 May, 2008 at the edge of Berlin’s [...]

The poor outlying districts of Bangkok are a world where you grow up very quickly. After both their parents die, eleven-year-old Oat, his little sister and his older brother Ek move in with their aunt. Ek works in a bar for male prostitutes and transvestites. His relationship with Jai, the son of rich parents, began when he was still at school. Their uneven love for one another is put to the test when the day of the annual conscription arrives; this is when a lottery decides [...]

In 1957 an American masterpiece was tried before a court of law. Standing trial was the poem ‘Howl’ by Allen Ginsberg, which he recited for the first time in public at the Six Gallery in San Francisco on 7 October 1955. Two years later, the poem appeared in print, published by City Light Books, a publishing house owned by the poet Lawrence Ferlinghetti. The tiny print run of 520 copies was subsequently seized by the police and Ferlinghetti found himself in court, having to account [...] 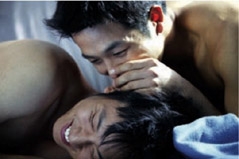 In his feature film debut Korean director Leesong Hee-il tells the story of a gay love affair that draws as much inspiration from the modern melodramas of Asian queer cinema as it does from the social realism of Charles Dickens' novels. Su-min has grown up at an orphanage in the country. When he comes to Seoul to study design he encounters a world that is completely alien to him. At first he finds a job at a factory, only to lose it swiftly as a result of redundancies. Before long, Su-min [...]