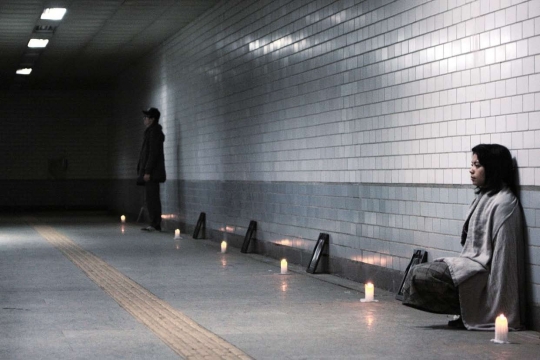 Some landscapes have been abused to such a degree that they make their inhabitants strange and lonely. Honghae in rural South Korea has this effect on Ji-Young, a female installation artist who feels like and wants to be a man. She, at any rate, blames her secret transgender existence on the wasteland where she grew up when she returns there from the Philippines with the shy young Rain. The two met each other at an agency specialized in procuring South Asian mail-order brides for Korean men. Searching for his foster father, Loi Tan, who has just been sacked from his job as a dishwasher, meets Rain, the newly wed bride without a bridegroom.

The film portrays life in a utopian age which dawned long ago. Nowadays, neither animals nor plants are the way “nature” created them, and humans too have adopted similarly ambiguous lifestyles. Land of Scarecrows is a science fiction film about human emotions that take on surreal dimensions in dilapidated interior spaces and spread out into areas that are neither urban nor rural.

This film depicts the everyday life of three isolated characters who each have a dream: Jang Ji-Young, a lesbian transvestite; Loi Tan, an adopted boy from the Philippines; and Rain, a young Filipina who dreams of going to Korea. Their lives accidentally intertwine and face a tragic ending.

Jang Ji-Young is an amateur sculptor who earns her living as a corpse washer. Her isolated existence is shaken up by a series of unexpected events: along with a group of Korean men looking for wives, she travels to the Philippines, where she meets Rain, a young woman who dreams of finding happiness in Korea. Jang Ji-Young also gets involved in a demonstration against environmental pollution caused by the corrupt Philippine government.

Loi Tan gets by with part-time jobs and is searching for his adoptive father – Jang Ji-Young, who adopted him and brought him to Korea when the boy was six, but then abandoned him. Loi Tan finds Ji-Young during a phase in which she is living as “normal” woman and not a transvestite.
After arriving in Korea, Rain marries Jang Ji-Young. But when she discovers that Ji-Young is actually a woman, she leaves with no destination. One day, she meets Loi Tan in a park and falls in love with him. The two decide to find Jang Ji-Young before leaving for the Philippines together.
HEOSUABIDEULEUI DDANG is about damage deep inside people. The emotional wounds the characters suffer and the damage they do to their surroundings illustrate the irony of modern human existence.

HEOSUABIDEULEUI DDANG is about our values and the way we live. The gypsy-like loner Jang Ji-Young lives in isolation from her surroundings. Coincidence plays an important role in her directionless, mechanically-lived life. It is absurd to try to measure a person’s quality of life by our own standards or those of society. Human life is like Pandora’s Box, too ambiguous and magical to measure.
This film is a strictly personal and sentimental picture poem, presented in the shape of a photo album, about different kinds of “pollution.” The body and soul of modern man suffer from the pollution of our environment; we become sick in surroundings we have ourselves destroyed. There is no separating perpetrator and victim; we are both victim and perpetrator.
Why is it that my mind cannot concentrate or be logical? Society is driving me mad. This film follows post-modern patterns. The heroine does not behave like a heroine; the story is not a story in the traditional sense – it is without direction, it dismantles and disperses itself. This is how I view society: it forces me out to the edges. All of my films are interrelated. HEOSUABIDEULEUI DDANG, my second feature-length film, is about so-called outsiders and the issue of pollution, and it questions as uncomfortably as MAJIMAK BABSANG - THE LAST DINING TABLE (2006) whether our society is a place worth living in.
Roh Gyeong-Tae

For a jaded filmgoer and film festivalgoer like me, surprises can often be few and far between. Whether it is the latest Hollywood super-spectacle or the most obscure, experimental art film, most films nowadays are variations on the familiar and endlessly overdone.
So it is quite a pleasure to come across such a film as Roh Gyeong-Tae’s HEOSUABIDEULEUI DDANG, a true masterpiece whose elliptical, challenging style is nevertheless eminently accessible. Roh’s second feature, which shared the New Currents Award (for best first or second film) at this year’s Busan International Film Festival, is one of the great discoveries one always hopes to find at a film festival, especially one with as vast a selection as Busan’s.
Opening with a cryptic image of two mudang (Korean female shamans) performing an elaborate ritual dance, HEOSUABIDEULEUI DDANG alternates between two locales: Honghae, a rural area of South Korea, and the Philippines. The film follows a number of characters, the three most significant being Jang Ji-Young, an amateur installation artist who also happens to be a transgender woman living as a man; Rain, a young Filipina who dreams of living in Korea; and Loi Tan, an ethnic Korean young man who was brought from the Philippines as a foster child. A beautiful and lyrical alchemy, not dissimilar to the artworks Ji-Young creates, brings these characters together and unites their destinies into a tapestry that is mesmerizing to watch.

HEOSUABIDEULEUI DDANG melds humor, melancholy, and an ethereal sense of spirituality in a way that elevates it far above the sort of pretentious, self-consciously arty films that are far too prevalent at film festivals. The phenomenon of Korean men seeking arranged marriages with Southeastern Asian women is presented in a very humorous way, with repeated scenes of nervous potential brides being sized up by their suitors. Ji-Young meets and marries Rain at one of these marriage agencies, of course with Rain initially being unaware that her new husband is a biological woman. Their relationship, however, isn’t played for laughs and in fact leads to some of the most poignant moments of the film. The film is also full of beautifully rendered scenes that could stand alone as short films, such as Ji-Young and Rain’s initial meeting, and a later scene in a karaoke bar where Ji-Young belts out a plaintive, romantic song.
Christopher Bourne, in: meniscuszine.com

Roh Gyeong-Tae was born in on November 26, 1972 in Masan, South Korea. He studied at KAIST (Korea Advanced Institute of Science and Technology) and worked as a stockbroker until 2001, when he went to the US, where he studied film at Columbia College in Chicago and the San Francisco Art Institute. He made several short films before making The Last Dining Table (2006), his first feature film. Land of Scarecrows is his second feature film. Roh is currently a professor at the Chung-Woon University in Hong Seung City, South Korea.