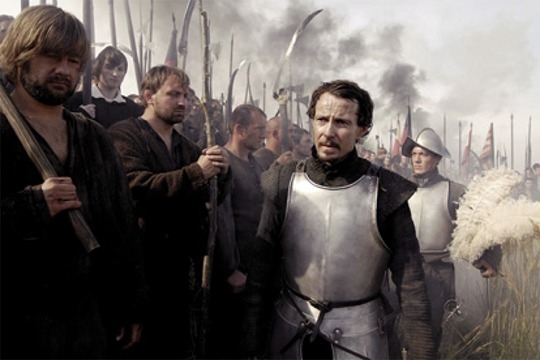 Sixteenth-century France. Europe’s most powerful state is being torn apart by religious wars. On the one side is the Catholic majority which holds sway over the Parisian court and, on the other, are the Protestants, known as Huguenots. Paris is ruled by Catherine de Medici who is determined to make use of her power to retain the throne for her three sons. But, in the south of France, in the tiny kingdom of Navarre, an opponent is emerging about whose existence she has, as yet, no knowledge: Henry of Navarre.
Henry reaches adulthood on the battlefields. He receives a letter at his camp. Catherine de Medici wishes to marry her daughter, Marguerite, to him so that Huguenots and Catholics can finally coexist peacefully. His mother urges Henry to accept the offer: Catharina’s sons suffer from a mysterious blood disease; if they were to die then Henry would become king of France. The marriage of Henry and Marguerite ends in the St. Bartholemew’s Day massacre, a bloodbath during which thirty thousand Huguenots are slaughtered. Henry survives, but is held prisoner in the Louvre. Marguerite is in love with the man that she was made to marry for reasons of state, but when Henry learns that she was aware of her mother’s murderous plan he rejects her. Henry escapes, rejoins the Protestant forces and continues the bloody religious conflict with the intention of founding a state based on humanist thought. And then he meets the love of his life: Gabrielle d’ Estrées.
When Henry’s brother-in-law, Henry III, Catherine de Medici’s last son, is murdered he becomes the new king – Henry IV. Marguerite lives in hope once more. But this sets the wheels in motion for a series of betrayals and intrigues.

Born in Munich on 13.2.1949, he studied drama, German and American language and literature at Ludwig Maximilians University, graduating with a doctorate in 1980. Since 1979 he has directed primarily television documentaries and dramas which have received numerous awards including the Adolf Grimme and German Television Awards. WILDFEUER, his debut as a director of theatrical features, earned him a nomination for the German Film Award.