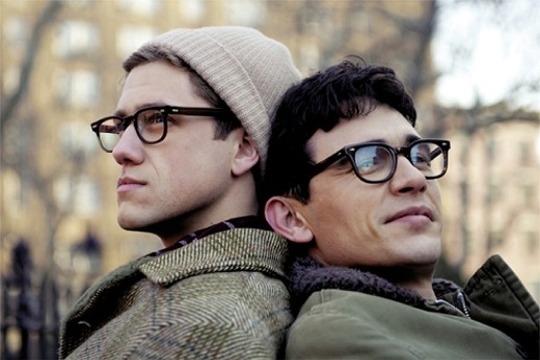 In 1957 an American masterpiece was tried before a court of law. Standing trial was the poem ‘Howl’ by Allen Ginsberg, which he recited for the first time in public at the Six Gallery in San Francisco on 7 October 1955. Two years later, the poem appeared in print, published by City Light Books, a publishing house owned by the poet Lawrence Ferlinghetti. The tiny print run of 520 copies was subsequently seized by the police and Ferlinghetti found himself in court, having to account for ‘distributing obscene literature’.
The trial, which was to make ‘Howl’ and its creators famous overnight, is still considered to be the moment when counterculture was born. Robert Epstein and Jeffrey Friedman have reconstructed this landmark historical moment from three perspectives. Their film documents the court proceedings; it also reconstructs in dramatised scenes the reactions of those at the core of young poet Allen Ginsberg’s life. Finally, there’s the famous poem itself, which illustrator Eric Drooker, who himself used to work with Ginsberg, has visualised for the film as a ‘Beat Fantasia’ to a score by Carter Burwell.
In the meantime, state attorney Ralph McIntosh and defence attorney Jake Ehrlich, a prominent lawyer in the civil rights movement, engage in some fierce verbal sparring, presided over by Judge Clayton Horn. Both sides have summoned witnesses and experts. At the end of the trial the conservative judge announces his surprisingly passionate verdict.

Rob Epstein and Jeffrey Friedman are best known for THE TIMES OF HARVEY MILK, which won in 1984 the Oscar for Best Documentary. PARAGRAPH 175 won the TEDDY for BEST DOCUMENTARY in 2000.

Rob Epstein was born on April 6, 1955 in New Brunswick, New Jersey. The documentary filmmaker became known to a wider audience with his film The Times of Harvey Milk (1985), which encapsulates a crucial turning point in gay politics. Since collaborating on Word is Out, Epstein has produced and directed numerous non-fiction works for national television. He has taught in the graduate program at Tisch School of the Arts at New York University, and is currently co-chair of the Media Arts Department at California College of the Arts, where he is a professor

Jeffrey Friedman: born in 1951 in Los Angeles. Has worked as assistant editor on documentaries and features since 1972, including Martin Scorsese’s RAGING BULL (1979).