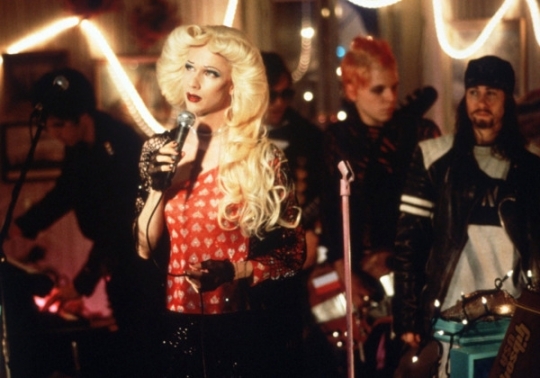 Hedwig And The Angry Inch

Once upon a time, Hedwig’s name was Hansel and he lived in East Berlin before the fall of the wall. A lonely boy who found his only solace on American Forces Network radio and in western rock music, Hansel had but two dreams: to become a rock star and to meet his ‘other half’. Could it be that he has found him in the shape of this American GI, who has promised him love and freedom in the United States? Since the GI even wants to marry Hansel, he decides to undergo a – sadly not quite successful – operation, which leaves Hedwig with a nasty ‘angry inch’. A year later, the couple have divorced. Hedwig is now living in a trailer park in Kansas. On television one night she watches the wall come down. And so, like a phoenix from the ashes, she picks herself up, buys herself a Farah Fawcett wig and forms a rock band. She scrapes together a living working as a babysitter and falls in love again, this time with the sixteen-year-old Jesus freak Tommy Gnosis. The two make beautiful music together. Could he be her ‘other half’? Unfortunately not. Tommy leaves her, taking Hedwig’s songs with him. When he rockets to stardom, it breaks Hedwig’s heart. Hedwig follows Tommy’s career, devastated, as his records are played on the radio and his concerts fill entire football stadiums, while Hedwig is condemned to appearing in greasy spoon restaurants. One cheerless night in New York, the two run into each other by chance. Hedwig pins all her hopes on a reconciliation, but there’s something better in store for her. A crazy mishap means that, suddenly, all eyes are on her. And only on her . . .

Born in El Paso,Texas in 1963. HEDWIG AND THE ANGRYINCH, his musical inspiredby Plato’s “Symposium” which he developed with musician Stephen Trask and first performed in rockclubs, celebrated its off-Broadway premiere in 1998.The film version screened in the BerlinalePanoramain 2001. His second film SHORTBUS premiered at Cannes in 2006. RABBIT HOLE, starring Aaron Eckhartand Nicole Kidman, whose cured an Oscar nomination for her performance, came out in 2010.