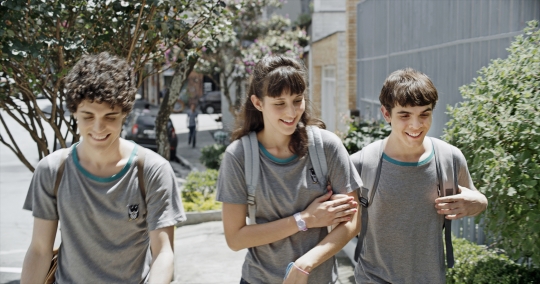 Giovana is Leo’s best friend. They spend their afternoons at the pool, awarding points for the level of their boredom and just hanging out. But there are limits to their intimacy. Leo is rather self-contained; even his schoolmates’ barbs can’t cause his sense of his own independence to waver. Tired of his parents’ over-protective attitude, this blind fifteen-year-old decides to determine his own life and applies for a school exchange. The arrival of a new pupil at school prompts Leo to reassess his daily routine. Having made friends with Gabriel he must now find a way to deal with Giovana’s jealousy. And yet, as naturally as Leo becomes aware of his feelings for Gabriel, the more he allows himself to feel unsettled by his friend’s tentative advances. With the dreamlike effortlessness of a Shakespearean comedy, the winner of the 2008 Crystal Bear has the protagonists of his first feature-length drama orbit each other in an emotional universe of fiery attractions, shy games of hide-and-seek and timid encounters – enfolding us in sensitive, almost weightless observational images as they begin to share their feelings.

Born in São Paulo, Brazil, in 1982, he studied at the University of São Paulo’s film school and has received numerous awards at international festivals for his short films CAFÉ COM LEITE (which won the Crystal Bear at the 2008 Berlinale) and EU NÃO QUERO VOLTAR SOZINHO. HOJE EU QUERO VOLTAR SOZINHO is his first feature film.