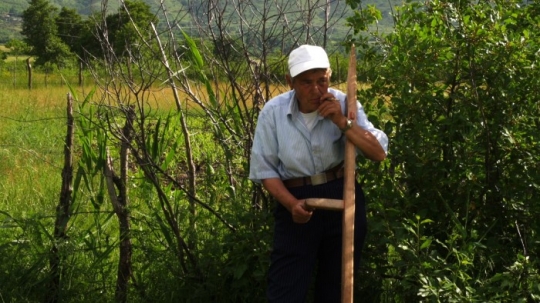 Hakie is 71 years old and lives self-sufficient in a hamlet in the Albanian Alps. Everyday life in this rural seclusion is marked by an archaic separation of male and female roles. After the death of his parents, Hakie inherited the house and farm and has lived on her own ever since. She works in the house, on the meadows and in the fields. A way of life, which is usually denied to a woman here, would not be the prophecy.
Is Hakie a man or a woman? Hakie is a "Burrnesha", a sworn virgin. These are sexual women who swear virginity in order to live socially as men. Hakie lives "the life of a man" with great determination, with all freedoms and restrictions. Although Hakie is not inferior to men of her age in any way, the consequences of her gender role change hit her hard. While the men are cared for by their descendants, Hakie has to cope with her difficult everyday life on her own. She does it with a strength that makes a big impression. The film accompanies Hakie in her everyday life and shows us how much identity and gender roles are constructed.

Born in Hildesheim, Germany in 1974, she completed a degree in visual communication focusing on film and media philosophy at the HfbK in Hamburg in 2004. In 2005 she received a travel bursary from the Karl H. Ditze Foundation and undertook a three-month research trip to Serbia. From 2004 to 2006 she took a postgraduate degree at the HfbK. She has collected wide-ranging experience in directing and editing documentary and essay films and has delivered numerous lectures and workshops at art colleges and festivals. She lives as a filmmaker and artist in Hamburg.