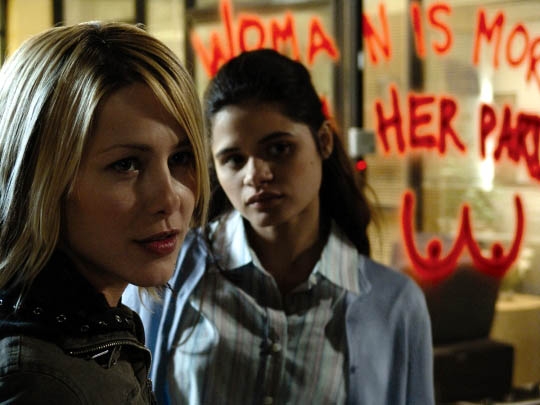 Anna is an average American teenager who is perhaps a little more insecure and a little less political than average. Dumped by her girlfriend and rejected by the college to which she has recently applied, Anna bemoans her fate: she really is a poor soul in an A-cup in a world where C-cups reign. On her way home from work she runs into Sadie. Not only is Sadie sexy, she is also the leader of a radical group of feminist punks, the "Clits in Action" - or CIA for short. Sadie introduces Anna to a completely unknown world. Nevertheless, Anna feels completely in her element during her first secret commando operation - not least on account of some heavy flirting on Sadie's part. But then things start to go pear-shaped. The CIA is obliged to admit that all of their efforts are fruitless. Thoroughly disillusioned, the members of the group disband. A tricky situation, in which everything would appear to depend upon Anna: will she resurrect her old friendships and come up with a brilliant idea that will provide the CIA with fresh impetus? Perhaps this question is best answered by New York critic B. Ruby Rich: "For anyone in despair over the state of the world or the movies, this posse of revolting dykes deliver a megadose of hope."

Born in Cleveland on 16.11.1970, she studied at Barnard College at Columbia University in New York. After graduating in 1993 she began her career as a script supervisor on around ten feature films. Besides several short films, some of which have won awards, she has also directed numerous episodes for television series as well as two feature films. Her feature film debut, an unconventional high school farce entitled BUT I’M A CHEERLEADER (1999), was a box-office hit in the US and in Europe.