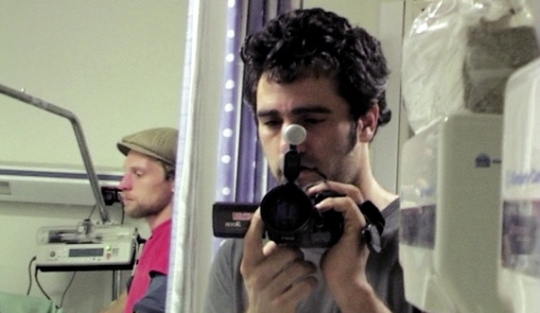 I Shot My Love

Over 15 years, Tomer Heymann has made a film portrait about the men in his life, his family and the development of his country. From a personal perspective and with humour and sensitivity, he shows the maturation of a 40 year old man, his family and his country, the actions of which he does not always agree with. Heymann uses old 8mm material, revealing intimacy and occasions from his private life. The film was shot with a small video camera that transmits a great deal of intimacy to the audience.

Seventy years after his grandfather fled to Israel from Nazi Germany, documentary filmmaker Tomer Heymann returned to Berlin in 2006 as a guest of the Panorama to present his film BUBOT NIYAR - PAPER DOLLS. It was in a Berlin club that Heymann met and fell in love with a German dancer named Andreas Merk. In his film I SHOT MY LOVE Tomer Heymann tells the story of their love affair.
Heymann’s mother Noa cannot get over the fact that Tomer is the only one of her children who still lives near her after the parents’ separation. When Andreas pays Tomer his first visit in Tel Aviv he not only has to get used to living in a new relationship, he also has to understand the complexities of daily life in Israel, as well as learn to cope with his lover’s family history.
Their love takes Tomer and Andreas to some beautiful places, but the family’s influence and their personal fears force the pair to confront thorny challenges. Their often unsettling discussions take place before Tomer’s rolling camera. The result is a series of intimate portraits that manage to stay close to the protagonists and maintain a thoughtful distance. In his film, Tomer Heymann tells a small personal story amidst echoes of the great events of our times.

Born in 1970 (Tomer) and 1976 (Barak) in Kfar Yedidia, Israel, these brothers have made over 20 documentaries and series together. They have recently been honoured with retrospectives in cities including New York, Buenos Aires, São Paulo, Tel Aviv as well as in Europe. Both teach at Israeli film schools.