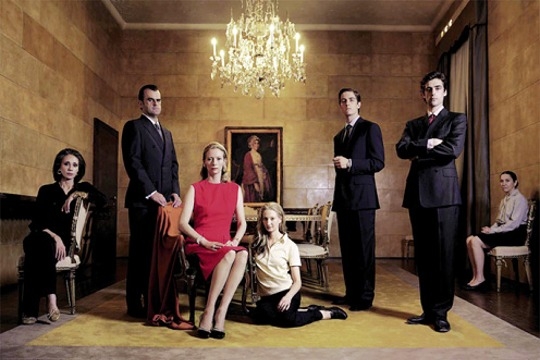 Emma is the trophy wife of an Italian textile maker. She shines in her roll, instructing servants and organizing high society meetings and parties. The fact that she lives in a cage only becomes clear to her by watching the development of her two children. Her daughter, who studies in England, falls in love with a woman and is ready to break free of her predestined path. On top of that, her son brings a cook home whom he loves platonically. Emma is sent into ecstasy by the magical feast the cook makes for the aristocratic family … Her feelings for the cook bloom like buds of the very first springtime.

This emotional drama is the third time Tilda Swinton has worked with director Luca Guadagnino. He wrote the roll of Emma especially for her. Tilda Swinton is a two time TE DDY AWARD winner (1988 and 2008).

“The camera hugs the actors, telling the story through the smallest details and gestures”, raves the Hollywood Reporter. The music of the renowned opera composer John Adams makes actors and pictures float through rooms, streets and landscapes. Variety compares the director with Hitchcock and Visconti.

Luca Guadagnino deliberated for a long time whether to become a cook or a film maker. As a film maker he follows the rules of good cuisine and prepares his work very thoroughly. He has been working with Tilda Swinton since 1999. In his documentary CUOCO CONTADINO (Peasant Cook, 2005), he explores the gastronomy and region of Sanremo. The heavenly hills above the Mediterranean Sea are the setting for the second act, in which Emma and Antonio passionately make love.

The third act of IO SONO L’AMORE describes a radically changing world. The wealth, the family and the rituals of power all fall apart. What remains is pain, separation, the scent of summer and loving freedom.