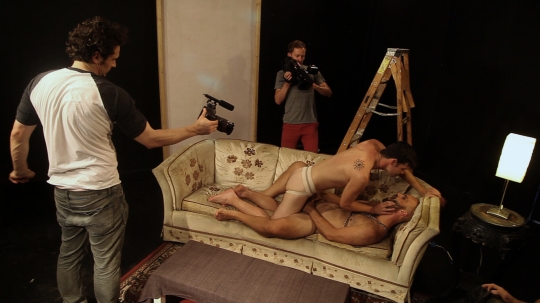 When William Friedkin’s film Cruising was screened in competition at the Berlinale in 1980 it unleashed a wave of controversy – and not just at the festival. Gay activists accused the film, in which Al Pacino plays an undercover cop investigating a case inNew York’s gay and leather scene, of stirring up homophobic stereotypes. Moreover, forty minutes of allegedly overly explicit scenes were deleted in order tosecure a less restricted rating for the film’s release. Oscar-nominated actor James Franco and Travis Mathews have made it their mission to restage this missing and bynow legendary forty minutes. The film constitutes the making-of one scene shot in a New York leather and bar before the on slaught of Aids and focuses on Val, who plays Al Pacino’s role. Heterosexual Hollywood actor Val has strong reservations about appearing in agay film. Skirting the border between reality and fiction, Interior. Leather Bar. explores Hollywood’s homophobic mechanisms and examines prevalent clichés.

Born in Palo Alto, California in 1978, he is an actor, director, screenwriter and producer. He won many accolades for his performance in the title role of the TV movie JAMES DEAN and in feature films MILK and 127 HOURS. He has also appeared in, amongst others, SPIDER-MAN 1, 2 and 3. In 2010 his shorts FEAST OF STEPHEN and HERBERT WHITE screened in the Panorama.

Born in Ohio, USA in 1975, this director, screenwriter, editor and producer with a background in psychology has primarily concentrated on topics such as masculinity and intimacy between homosexual men. He collaborated with James Franco on the docu-fiction Interior.Leather Bar which screened at over 75 international festivals, including the Berlinale and in Rotterdam. His 2012 debut feature film I Want Your Love about a group of gay friends in San Francisco premiered at the Frameline Film Festival and has been shown at numerous other international festivals.