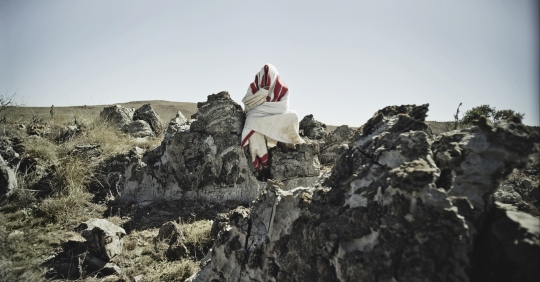 Ukwaluka is an ancient circumcision ritual for young men still widely practiced by the Xhosa in South Africa. It marks the transition from youth to manhood. A boy who has just undergone circumcision sits in semi-darkness in a simple hut on a hill, far away from the village, as prescribed by the initiation ritual. He is covered from head to toe with a paint made from clay which makes him look as white as a goat. This should be a period of healing, but he is cold and in pain. His grandfather, who is supposed to induct him into his new life, has not yet appeared. According to the belief system of the Xhosa, Ukwaluka also purges the boy from homosexual desires, for which there is no place in the world of adults.

Born in 1978, he lives in Johannesburg in South Africa. After studying at the Tisch School of the Arts in New York, he directed television, documentaries and commercials. His miniseries Hopeville won numerous awards at international festivals. He also works as a theatre director and his stage play 'The Epicene Butcher' won the Amsterdam Fringe Festival award for best international production. His short film iBhokhwe (The Goat) screened in the Berlinale's Generation section and at over 20 other festivals. The Wound is his feature film debut.