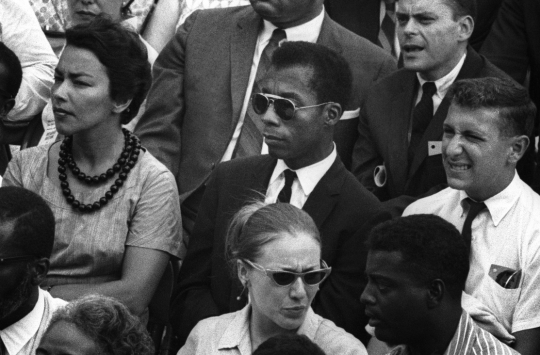 I Am Not Your Negro

In June 1979 renowned US writer James Baldwin began work on his last, unfinished text ‘Remember this House’. His personal memories of his three murdered civil rights friends Malcolm X, Medgar Evers and Martin Luther King and his reflections on his own painful experiences as a black American serve to re-write American history. Raoul Peck has turned these thirty hitherto unpublished pages into a powerful collage of archive photographs, excerpts from films and newsreel footage: the boycotts and the resistance against racial segregation in the 1950s and 1960s, the invisibility of black Americans in Hollywood’s legendary works, the Afro-American protests against white police brutality that continue to take place even today, Baldwin’s complex relationship with the Black Power Movement and one FBI report’s paranoid view of Baldwin’s homosexuality. A trenchant and disturbing essay about the reality of the lives of African Americans – lives that are still largely ignored by America’s mainstream. Samuel L Jackson’s voice lends Baldwin’s poetic, meditative language suitable expression.

Born in Port-au-Prince, Haiti in 1953, he grew up in Zaire and the USA and studied in France, the USA and at the German Film and Television Academy in Berlin. In 1993 his feature film L’homme sur les quais (The Man by the Shore) was the first Caribbean film to screen in Competition at Cannes. Between 1996 and 1997 he was Minister of Culture in Haiti. He was member of the Berlinale International Jury in 2002 and of the competition jury in Cannes in 2012. His feature films and documentaries have screened frequently in the Berlinale, most recently Meurtre à Pacot (Murder in Pacot) in the Panorama.