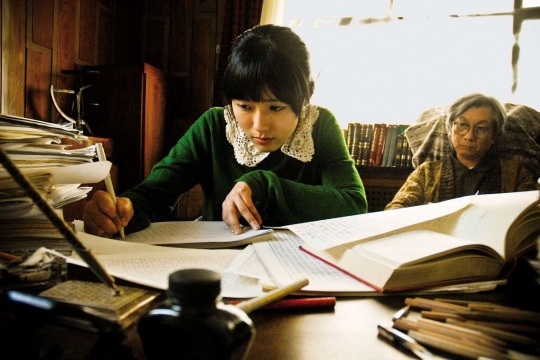 JANGRYESIGEUI MEMBER successfully balances an existential immediacy with subtle humour. While attending a young high school boy's funeral, a married couple and their teenage daughter reflect upon their own personal relationships to death. Slowly each of their individual connections to the dead boy emerges. Apparently he had been writing a novel entitled “Members of the Funeral”, where the troubled nature of a family is laid bare, triggered by their attendance at a youth's funeral…
Seung-Bin Baek's impressively controlled debut feature filters a darkly droll family drama through a prism of literary associations.

Why does neither the mother nor the father nor the daughter in this family want to attend Roh Hee-Joon’s funeral? All three of them knew the young man who committed suicide. All three of them had a special relationship with him, but each of them tries to hide this from the others. A fast-paced montage introduces us to the family members and their peculiarities. The daughter has an obsession with death. She collects decomposing animals and spends her free time washing corpses before funeral ceremonies. The mother was brought up by strict grandparents who thwarted her ambitions for a career as a crime novelist, so now she’s a frustrated teacher of literature. Her husband suppresses his true desires, but he still hasn’t got over the death of his first lover. Roh Hee-Joon filled a gap in the lives of all three of them. He was a friend, an object of desire, a scapegoat and a reflection of their own needs. The suicide victim also has his say. Roh Hee-Joon recorded his strange experiences with the family in a novel he wrote. The complex structure and absurd moments turn Members of the Funeral into a subtle family drama that looks deep inside this smallest of communities.

Frankly, of all my secrets, the most complicated one is my family. Although they are the people I spent most of my time with and whom I know best, they are people I cannot understand. So sometimes I ask myself the following questions: is there anything besides genes and chromosomes that can prove we
are a family? Shouldn’t there be some sort of emotional or psychological connection that bind us together? In relation to these thoughts, this story initially began with this sentence: “A family is gathered at a funeral, and this is the first time they meet.” More than anything, the fact that this family
hardly meets over the course of the film was necessary and important to me. They are so consumed and busy dealing with their own pains and difficulties that they cannot waste any time on tedious daily conversations. So after seeing this film, if you wonder why these people are even a family, I’d be very
satisfied.
Baek Seung-Bin

“Death should be dealt with more openly”

In the first and the last scenes of the film, three members of this dysfunctional family gather for Hee-Joon’s funeral. It’s the only occasion we see them together as a family. They share meals at the funeral table, and Hee-Joon appears posthumously. Could you explain more about these scenes?

This gathering of the family was important to Hee-Joon. While writing his novel, he thought about how he could gather his three protagonists in place, and realized his own funeral could be the answer. The family is hardly seen together in the film, nor do they share their daily lives with each other. To me, this was the only important and interesting thing: these characters see each other at the funeral for the first time in the film. They are finally sharing something, which binds them in silence. It might be guilt towards Hee-Joon, or embarrassment and shame from finding out others’ secrets. Whatever the sentiment is, I believe the fact that something is being shared intensely by the three of them gives Hee-Joon a compelling reason to write his novel Members of the Funeral.

All three family members, the father, the mother, and the daughter establish their own relationship with Hee-Joon. Noticeably, the father and the mother seem to be repeating their own past through their relationships with the boy. It seems as if a personal history is tragically repeated, and becomes a history of a society.

Yes, all three of them do similarly repeat their pasts in their relationship with the boy. The difference would be that the daughter’s relationship is more horizontal and intimate compared to the parents, who are on a higher level of the hierarchy and who use this as a source of power. The father endlessly wants to repair his failed relationship with his own father, and the mother endlessly wants to fight off her grandfather’s ghost. I am not sure that the repeated personal histories become a social history, because I don’t think their experiences and their awareness are portrayed effectively enough to carry traits of universality. However, I find it a great idea to understand and predict the future of a society by speculating on individual and family histories.

It seems that all the characters except Hee-Joon are portrayed as abusive and lacking humanity towards each other.

With the exception of the mother, the other three characters are not necessarily abusive. When they are put into one space, they may seem that way because of their behavior and way of talking. I think this is one way of expressing their interest towards each other. Of course, this is a bit twisted. Perhaps this is because they would rather hide their wounds and protect themselves from getting hurt again. I still hope, though, that Hee-Joon was able to leave some marks on their hearts.

Various deaths appear in the film. These deaths seem to be crucial touchstones for each character to develop his or her persona.

A few years ago, I experienced a death in my family. The remaining family members endured the loss by keeping quiet, and at one point, this silence stopped being an expression of condolence and became part of a lifestyle. At the same time, I started feeling that the deceased was actually one of us who are left behind, rather than someone reduced to ashes. Therefore, it was important to me that deaths in this film were not portrayed as taboo, or as something that makes one feel uncomfortable. I believe that too solemn an attitude towards death prevents people from confronting and communicating the real issues behind it. These subject matters should be talked about more openly. The two deaths each character goes through are intended to show that deaths become unique experiences for the person left behind. For example, one can see that the parents’ deaths were relatively less important and less influential for both the father and the mother, compared to the coach’s and the grandfather’s deaths.

The father seems to be trapped in his childhood confusion between sexuality and paternal roles, and he suffers from the lack of his own sexual identity.

As a child, the father had to take care of his own weak father who had been ill for half of his life. This drew him to his swimming coach, who seemed to be an ideal masculine role model, and this emotion developed into a crush. However, the coach was not the ideal man or a father figure he had expected. Then I asked myself what kind of father he would be later in his life. I imagined him wearing a mask of a father, but constantly searching for a son figure as a romantic partnership.

What was the process of making this film? Was the procedure part of the curriculum of KAFA (The Korean Academy of Film Art)? I understand that your mentor is Park Ki-Yong, the director of NAKTA(DUL) - CAMEL(S) (Forum 2002). What was his influence on your work?”

KAFA, as a film school, was founded more than 20 years ago, but this was the first year the Academy’s Advanced Program was introduced. This new program offers students and graduates further education opportunities in producing feature films. At the time, I was writing a scenario about an eccentric family, and when I heard about this, I applied. Park Ki-Yong of Camel(s) has been a very
important mentor of the film. He also serves as the president of KAFA. To the students, he is a “Big Daddy,” who offers endless support and encouragement. In the film, the actress who plays the mother was the same actress starring in NAKTA(DUL). I suppose this can be seen as one hint of the many indicators of his influence on my work.
Interview: Kim Young-Ji, January 2009