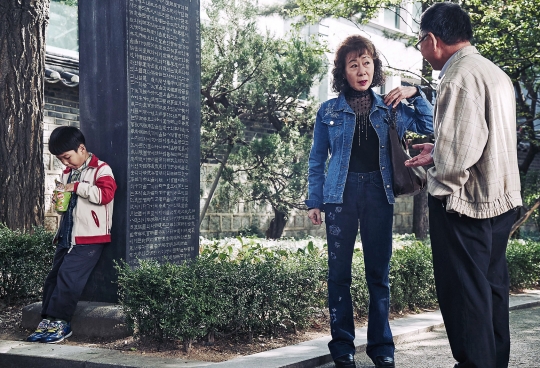 Youn So-young has contracted gonorrhoea. ‘Make me well again quickly’ she tells her gynaecologist, because she wants to get back to work. In a park in Seoul, this senior citizen manages to scrape together just enough money as a ‘Bacchus lady’ to avoid begging. ‘Bacchus ladies’ are elderly women who sell a popular soft drink containing taurine known as ‘Bacchus’ and offer sexual services on the side. Korea’s rapidly ageing society barely has any money left for its pensioners and poverty among the elderly is soaring. When little Min-ho’s mother is detained by the police, So-young takes him in. The boy, who only speaks Filipino, experiences a rather unique sort of patchwork family in this courtyard peopled, alongside So-young, by her transgender neighbour and a one-legged young man. Many of So-young’s aged former clients and friends can no longer see a way out of their situation. One after the other, they ask this laconic lady, who for years has been harbouring a secret, for one last favour.

Born in Seoul, South Korea in 1966, he studied Turkish at Hankuk University in Seoul. Upon graduation, he went on to study film at the Korean Academy of Film Arts. His short film HOMO VIDEOCUS, made in collaboration with Daniel Byun, has won awards at international festivals. He made his directorial debut in 1998 with AN AFFAIR. His films UNTOLD SCANDAL, DASEPO NAUGHTY GIRLS, THE ACTRESSES and BEHIND THE CAMERA all screened in the Berlinale Panorama. The celebrity-filled drama MY BRILLIANT LIFE (2014) won an audience award at the Far East Film Festival in Udine.